"Do you see what's happening in Baltimore, Mom?" 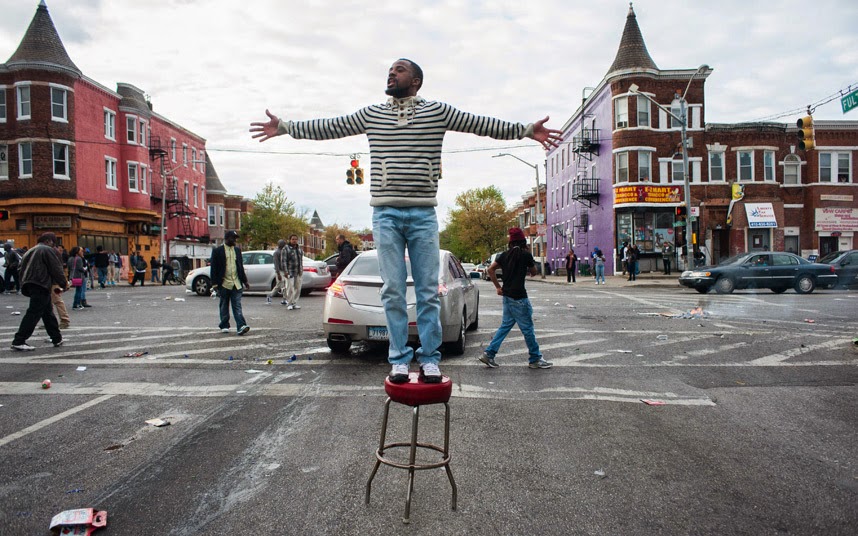 You know, I can't possibly write about every instance of a Black man killed in suspicious circumstances following encounters with police. I can't live in that place emotionally. So I didn't write about the South Carolina cop shooting a fleeing but unarmed Walter Scott in the back after pulling him over for a broken taillight. To write about it I would have needed to immerse myself in the details, so that I could be sure I had them right. I didn't want to do that again. I've done it so many times now. I could spend my whole life running down such details, so often does this particularly story of deadly but unwarranted police force occur. In this case, a bystander's smartphone camera caught the cop pumping nine bullets into Walter Scott's back as he ran from the scene.

Some reports say Scott owed child support and didn't want to go to jail for it, because of course his rap sheet was revealed in a by now typical effort to demonize the victim after the fact. It's easy to say he shouldn't have run. But maybe he feared for his life. I mean, we all know the stories. In this case, after cutting Walter Scott down in a grassy field, the cop, who didn't know he was being filmed, then walked over and planted a taser next to Scott to support the story he told that Scott was threatening him with it. The phone camera footage caught him planting the evidence and revealed his lie. The cop has been charged with murder. Kudos to the powers that be in making that call based on the video footage.

And now we have Freddie Gray in Baltimore, a young African American man who sustained fatal injuries to his spinal cord and larynx after being arrested for possession of a so-called switchblade. His death sparked riots and looting in Baltimore on Monday night as protesters vented their frustration at this history that just keeps repeating itself in a nightmarish loop. I'm not saying the rioting was in any way helpful, but I really didn't feel like delving into the details. I've barely watched the news this week, though I did field calls from my daughter saying, "Do you see what's happening in Baltimore?" and asking in a voice both bewildered and so very weary why this keeps happening and is there anything at all we can do to change it? Sometimes her idealism breaks my heart. But I'm glad for it, too. I try to help her believe that we are each capable of increasing what is good and just in the world by the choices we make in our own lives every moment. Even so, I didn't head off in a quest for the facts because, you know, I have to keep living my life.

The Baltimore police department issued a report yesterday saying that another prisoner heard (not saw; he was separated by a metal partition) Freddie Gray trying to injure himself inside the police van when he was being taken into custody. He says he heard Freddie Gray throwing himself around inside the van. Wow. Are they really trying to sell us this one? Do we really think Freddie Gray strangled his own larynx and severed his own spine?

I might have to follow this thread after all, just so I can decide what I think about the whole sordid mess. Again.

One thing I found right away: The cops didn't have cause to arrest Freddie Gray. The knife he was carrying was not illegal, nor was he brandishing it in any way. The knife was a reason fabricated after the fact. So why did they arrest him in the first place? Apparently Freddie Gray saw the cops in his neighborhood and ran. Why did he run? Because one of the cops had beaten him up several times before, and Freddie decided he didn't want to be whaled on again. But in a cop's mind (and America's mind too, if we're being completely honest) a Black man running is automatically a suspect, so the cops gave chase, and then they arrested Freddie for resisting arrest, and after searching him found the pocket knife. Which was legal to carry. But they charged him for possession of a weapon anyway. Never mind that they knew full well it would be thrown out at the first pass.

Freddie Gray wasn't supposed to be in police custody at all.

And now he is dead.