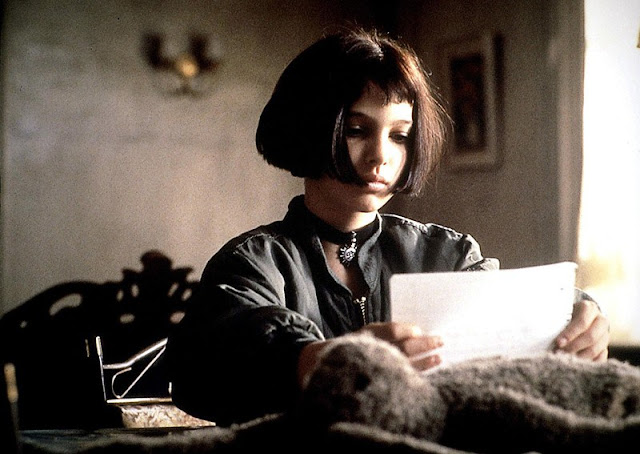 Last night, after evening visitors departed and everyone else was asleep, my husband and son and niece, and one significant other dreaming in the far reaches of the house, I stayed up alone in the living room, watching The Professional until well past 3 a.m.

It's a Luc Besson crime thriller about 12-year old Mathilda, whose family is murdered by corrupt DEA agents in a drug deal gone wrong. Leon, a professional hit man who lives down the hall takes her in, and at her insistence begins teaching her the assassin's trade. Until they become a small dysfunctional family, he's an illiterate, unsocialized loner and she's fighting to keep the shards of her life together. In one early scene in the hallway of their building, Mathilda asks Leon, "Is life always this hard or only when you're a kid?" Leon considers for a long moment. At last he says, "Always this hard."

They grow to depend on each other in the midst of crisis. The man's awkward discomfort at the girl's hero worship doesn't keep him from being fiercely, even violently protective of her. She is like a daughter, teaching him to read and write, anchoring him to human connection. She gives him something to live for, someone to die for, and will they avenge her family's murder and walk into the sunset at the end? I'm not telling.

The relationship between man and pubescent girl manages to steer clear of creepy, despite the child's declaration that she's falling in love. "How do you know it's love if you never been in love before?" the hit man scoffs in his heavily accented English. "I feel it," Mathilda says. "In my stomach. I always had a knot there and now it is gone." She doesn't understand that what she feels for the first time in her young life, is protected, cared for, safe. Leon only responds, "So you don't have a stomach ache anymore. I don't think it means anything. I'm late for work." 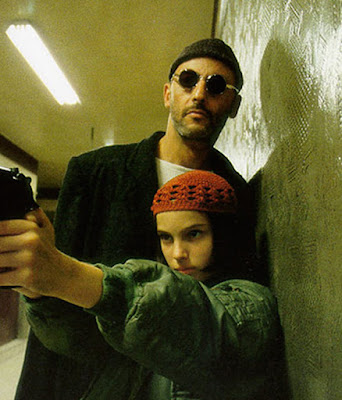 Natalie Portman plays the 12-year-old survivor, in her screen debut. She has a captivating face and expressive eyes. She's brilliant. French actor Jean Reno plays the hit man, gruff, his face pocked marked and almost ugly, except it too is a compelling face, tormented, struggling with the unruliness of human emotion that he had so resolutely locked away.

I've always loved this film, though I've never seen the longer international version, which includes scenes of the girl's first hit, and her precocious attempts to seduce the man who saved her life. Mercifully he does not take the bait. Apparently those scenes didn't play well with an American audience back in 1994 when the film was first released, but now I'm curious to see them, as they also explain more of the hit man's past, and how he came to America from Italy, and fell into his current profession. I hope I'll like the film as much when I finally see the long version, which is titled simply, Leon, and which I just might watch today.

I woke up this morning feeling okay, feeling grateful even. I realized on opening my eyes that I have dreamed my whole life of living this way, of sleeping until I wake naturally and then spending the day writing, my loved ones arriving home come evening. So I am not writing my own books these days; I am writing someone else's, but to me that is equally as satisfying, because it is what I choose now. The moral of the story: Your most insistent dreams and fantasies might be already coming true. Don't abandon them or think they are impossible. Do the opposite. Dream harder. I might be talking to myself here, about those other still to be manifested dreams.