So Justice Scalia died. One of his last big decisions from the Supreme Court bench opined that black students should go to less competitive colleges because they just aren't equipped to handle the competitive ones. My daughter is set to graduate from her Ivy League college in May. This should give you some idea about how I felt about Scalia's tenure on the bench. I am glad I will not have to endure any more of his opinions, though of course, I understand that his family is grieving. Oddly, one of the most liberal justices on the bench, Ruth Bader Ginsburg, was best friends with Scalia. She wrote the most beautiful tribute to him, just gorgeously expressed, which I took to be more a reflection of her excellence than his. But it humanized him somewhat that this woman I do admire, was so close to Scalia. It helped me keep the uncharitable thoughts to a minimum. As my mother used to say, don't speak ill of the dead.

Which doesn't mean we can't speak the truth about the fact that a lot of Scalia's decisions were devastating for people's basic human rights. And now the Republicans are vowing to filibuster any nominee Obama sends to Congress for confirmation. Of course they are. Lots of memes popping up online about that, but my favorite one might be this: 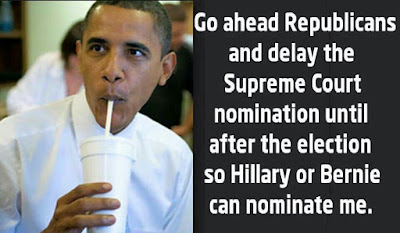 It's snowing again outside. The street lamps just coming on are making serene pools of the light on the untouched snow.  My husband, my son and his girlfriend are all ensconced in this cozy apartment on President's day. I feel restless and peaceful. Both.

We're going to watch the movie Bridge of Spies.
Posted by 37paddington at 5:41 PM