The world she fought for 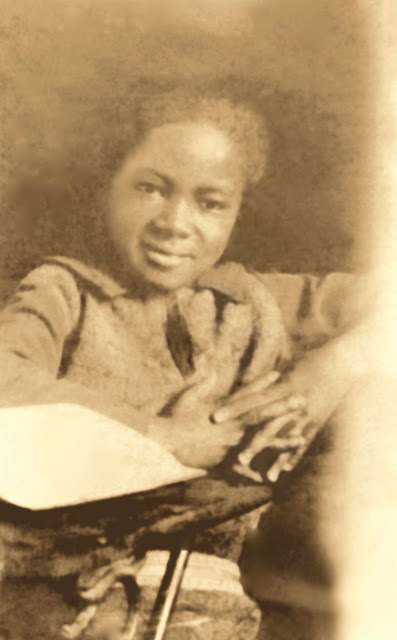 That was her school picture, taken in 1927. A version of that photograph is being used on the cover of her book, Overcome: My Life in Pursuit of A Dream, which will be published in just a few more weeks. I love this photo of Dr. Ellamae Simmons as a schoolgirl. She looks so confident and open to the world. Her best friend in tiny Mount Vernon, Ohio hadn't yet told her that she couldn't play with her anymore because her mother didn't want her playing with coloreds. That was still two years in her future.

The thing I love most about Ellamae, now on the verge of 98 years old, is she didn't ever become bitter. Or lost. Or defeated. She refused to curl up in a corner, licking her wounds, no matter how justified she might have been. After graduating her mostly white high school with a 96 percent average, she was expected to become a domestic in a white family's home. That was the horizon for black girls in her time and place. But Ellamae yearned to study medicine, and she set about creating a world that would enable her—and others like her—to do just that. Her life wasn't easy. But she refused to believe she wasn't worth the fullness of her talents and her dreams. And somehow, there was always that dancing light in her eyes. Everyone I interviewed to write her life story spoke of it. She humbles and inspires me.

In other news, Donald Trump is starting to seem unstoppable, taking all the delegates in the South Carolina primary on Saturday. I saw the movie Race this weekend, about Jesse Owens' triumph at the 1936 Berlin Olympics (Jesse Owens, by the way, has a cameo in Dr. Simmons' story). I was chilled by the scenes with the Nazis, the malevolence and hate, and the stadium-wide straight-armed salute. Interestingly, the photo that many news organizations ran with the story of Trump's South Carolina win was of him at the podium apparently giving the same straight-armed salute. Maybe the camera just caught him mid-wave, and the news outlets decided the image went quite well with his rhetoric.

An op ed in The Washington Post this morning captured my feelings about this moment almost entirely. Titled We Must Stop Trump, it argues that we are at a crossroads, and we cannot afford inertia. Trump is a buffoon and a clown, yes, but he's also dangerous. I swear, he makes Jeb Bush look like a statesman. I think Jeb, who was the first to take on Trump, understood that they need to reduce the field, stop splitting votes. Don't get me wrong: I'm not a fan of any of the Bushes, but there was a decency about Jeb, especially juxtaposed with Trump, Cruz and Rubio. I'm actually sorry to see him go.

They say what you focus on multiplies, so I'm going to focus on the courage and resilience of citizens like Dr. Ellamae Simmons, and I'm going to focus on Trump's appeal to the forces of hate shriveling in the glare of a nation willing to shake off the stupor, willing to stop laughing ruefully at the reality star who smears Mexicans, Muslims, black people, brown people, everyone who is not physically like him, with the broad brush of hatred and contempt. Hell, there's even a verb for it now—to otherize.

You can read The Washington Post piece by Danielle Allen here.