Today is the final day of IV infusions for my husband. He is at this moment giving himself the second to last treatment, with the final one tonight. Another step toward full recovery.

For his birthday on Saturday, our son came over. He arrived on Friday night, using his key and standing in the doorway yelling "Surprise!" He was smiling and pleased with himself, like a five year old who knows he is always a lovely surprise. He stayed until Sunday night, just hanging out with everyone, watching football with his dad, and intermittently disappearing into his old room to study. He has tests every week for the nine-month-long paramedic course, and if you fail more than two, you're out of the program. In a class that started out at 60, the attrition in two months has been severe, 12 people already gone. So far, our boy is doing well, grades in the 90s, and he's certainly learned how to study. It helps that all that medical stuff is endlessly fascinating to him, especially in an emergent setting. He might have been made for this. 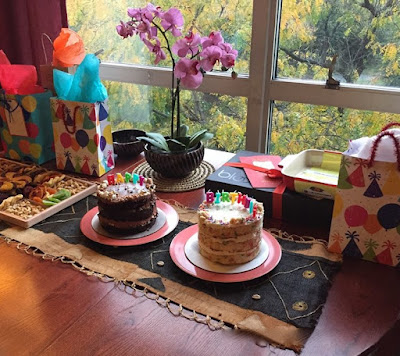 On Saturday our daughter and her boyfriend came over to help celebrate, along with his mother, whose birthday was a couple days before my husband's, and his sister, who cooked and brought a raft of delights, a scrumptious full course meal. My man made his famous seafood gumbo, and I took care of the cake, ordering a chocolate one and a vanilla confetti one from Momofuku Milk Bar. The latter is lately my family's favorite kind of birthday cake, and the 6" version is small enough so that we aren't left eating cake for breakfast, lunch and dinner the following week. Which neither my husband nor I need. We sent the remainder of the chocolate cake home with the upstaters on Sunday morning, while our son finished the confetti cake for breakfast. We all had a lovely time, and the birthday man and the birthday woman judged the low key festivities perfect. 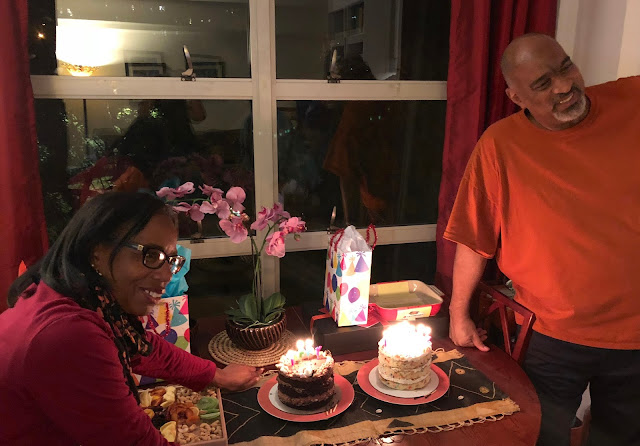 Then on Sunday night, my husband's uncle, his wife, and their son drove from New Jersey to have dinner with us. His uncle had triple bypass heart surgery twenty years ago, at the same age my husband is now, so the two of them exchanged war stories. It was fantastic seeing them. My husband's cousin, who was 13 years old the summer I met him (my husband was a tender 23) has grown into a fine and handsome family man. I could see my son in him, a couple decades down the road. It was amusing to be in a room with these four generations of men, all of them bald with beautifully shaped heads, all of them well over six feet tall. I felt grounded in an odd way by this visible reminder of the bond that is family. We missed you Bruce!

And now, back to the week. I was tossing with anxiety all last night. I barely slept, rehearsing an encounter with the insurance people this morning. There's no such thing as coasting along, breathing into a respite. As daybreak edged into the room I kept watching the clock, waiting for the hour when I could finally make the call. At 9:13 AM, I dialed the number on the registered letter that arrived at our door last evening. It's not yet resolved, but I will bird-dog it until it is. My husband is philosophical. They got it wrong, he says. We'll make it right. In the meantime I am sitting here with that peculiar hollowness in my chest, the shallow agitated breaths, adrenaline surging and surging.

But the weekend was really good. And tomorrow they will remove the PICC line from my husband's arm and he'll begin the next stage of his healing.