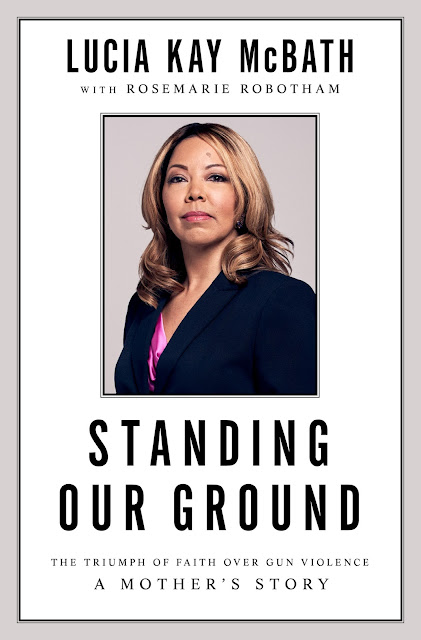 Here's the back cover copy.

From the national spokesperson for Everytown for Gun Safety and leading gun violence prevention advocate comes the riveting memoir of a mother’s loss and call to action, as well as her faith-based exploration of how the nation’s gun laws put a deadly target on American lives.

Standing Our Ground is Lucia Kay McBath’s memoir of raising, loving, and losing her son, and the story of how she transformed her pain into activism. After seventeen-year-old Jordan Davis was shot by a man who thought the music he and his friends were playing on their car stereo was too loud, the nation grieved yet again for the unnecessary loss of life. Here, McBath goes beyond the events of that day and the assailant’s defense—Florida’s controversial Stand Your Ground law—to present an emotional account of her fervent fight for justice, and her spiritual restoration and resolute faith as she awakened to a cause that will drive the rest of her days.

More than McBath’s story and that of her son, Standing Our Ground keenly observes the social and political evolution of America’s gun culture, making this a must-read for anyone concerned with gun safety in America.

Lucia “Lucy” McBath is a mother, wife, businesswoman, and activist for social justice. After a 30-year career with Delta Air Lines, her second career is focused on legislative reform that will make communities safer for every American. Lucy holds dual roles as the national spokesperson and faith and community outreach leader for Everytown for Gun Safety and Moms Demand Action for Gun Sense in America. In the 2016 presidential campaign she served as a surrogate for Hillary Clinton as one of the Mothers of the Movement. She continues to advocate for common sense gun laws.

Rosemarie Robotham is an award-winning author, editor, and literary collaborator. A former senior editor at Simon & Schuster, she also served as the deputy editor of Essence magazine. She lives in New York City with her husband and two children.