Another emotionally stirring Oscar night image was everywhere on the day after. At the celebrity-studded Vanity Fair party after the show, actress Selma Blair made her first public appearance since being diagnosed with multiple sclerosis (MS) last fall. She stood for photographer Mark Seliger's camera with cape flying and gold-embossed patent leather cane in hand. 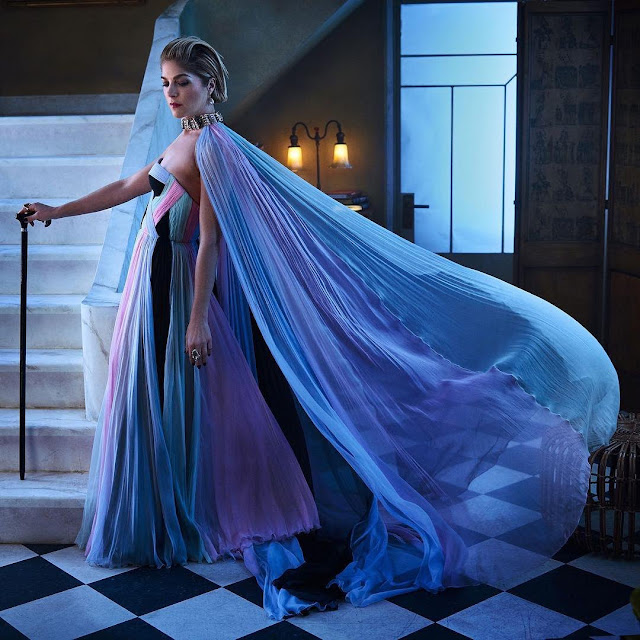 Jennifer Brea—who lives with the debilitation of myalgic encephalomyelitis (ME) and who, from her bed, made the very fine documentary Unrest about the frustrations of ME sufferers in their quest for sensitive and competent medical care—tweeted a simply gorgeous reflection on the Selma Blair portrait.

Until I saw it, I didn’t know how much I needed this photo of Selma Blair at the Vanity Fair Oscar party last night: beauty, pain, glamor, real life—all in a single portrait.

Blair came out about her MS diagnosis in October: “Going out, being sociable holds a heavy price,” she wrote in a post after her diagnosis. “My brain is on fire. I am freezing. We feel alone with it even though the loving support has been a godsend and appreciated.”

“People write me asking how I do it. I do my best,” she continued. “But I choke with the pain of what I have lost and what I dare hope for and how challenging it is to walk around.”

The portrait is by Mark Seliger, a master celebrity photographer. What I love about this is how every element of the photograph lives on more than one plane. It’s beautifully lit but also kind of dark. Her expression could be interpreted as downcast or signifying strength.

Her dress is fantasy, fragility and royalty at the same time. Representations of disability need to be complex in the way pop culture often isn’t because our lives and experiences can be wonderful and awful all at the same time (or depending on the minute, hour or day!).

Of course that complexity is true of all humans! But we—disabled people—don’t often get to be portrayed in this way.

And in the fantasy, we-all-want-to-see-that-movie-get-made version of the photo: is her cane an assistive device? A family heirloom? The source of her power? The object that helps to channel it?

She’s has Wonder Woman-level goddess-like power, but if she uses her cane for too long, her brain is on fire. Or she turns to ice...or she collapses and can’t move. Just sayin’.

BTW: The superhero universe whether or not it is self-aware has incorporated many of the dynamics of disability, chronic illness, and mental illness in many of its characters without actually plumbing the depths and potential of these experiences.

Imagine a film that attempted to do that. And you could cast Selma Blair as the hero!

I am so inspired by this photo, I might just go write some stuff!

One of Jen Brea's commenters added this:

They probably didn't mean to add this aspect, but it also highlights the inaccessibility of the world for a lot of disabled people—her cane on the first step of a long flight of stairs, maybe she's contemplating how she's going to navigate that huge obstacle.

To which Jen replied:

How did I miss that??

It's possible this image was so moving to me because in truth, I should be using a cane. But despite my own pain and precarious balance when walking, I mostly leave it at home. It embarrasses me. It makes me think that people will judge my mutinous gait as the result of my girth rather than structural issues inherited from my slender and petite mother, who suffered severely with arthritis and the premature dissembling of joints. Admittedly, carrying extra weight all my life has not helped these conditions. And of course, Selma Blair is beautiful and slim, so the correlation here is not exact. But by God she wields that cane like a frickin' superhero and makes me think maybe it's all about the attitude we bring, which means I can be a frickin' superhero too.