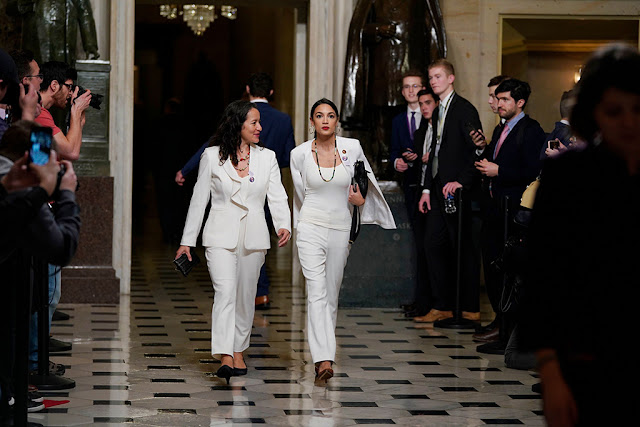 Everyone's talking about the photo of Nancy Pelosi giving the president her bless-your-squeezy-little-heart sideways clap at the State of the Union address, but for me the iconic photo from that night is this one, Alexandria Osario-Cortez, aka AOC, walking through Statuary Hall toward the chamber like a boss, white suffragette cape flying, the boys on the side gawking at her sheer badassness and brilliance, the photographers  falling over themselves to get The Picture.

It was a woman, Carolyn Kaster of Shutterstock, who actually captured all the stories happening within that one moment, the arrival of the 29-year-old congresswoman from New York and Ana María Archila, the Bronx immigrant activist who confronted Senator Jeff Flake in an elevator and got him to change his vote (for one round anyway) on Supreme Court nominee Brett Kavanaugh. 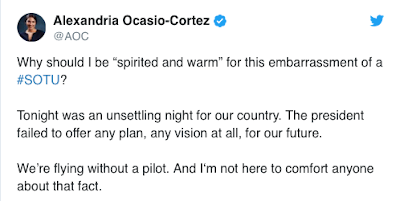 AOC—who's so well known now that people refer to her by initials—would later be criticized for not being "spirited and warm" as the president spoke, for looking "sullen and teenaged" because she didn't smile and clap at his empty blather, and stayed resolutely seated while others stood. AOC responded to the criticism on social media, with her usual mad clapback skills. This young woman, unbought and unbossed, is fearlessly speaking truth to power in congress. Did you see her lightening round in the House on the travesty of campaign finance laws two days ago? I urge you to watch it. No wonder the wealthy ole boys hate her. She's exposing their get-rich-on-the-backs-of ordinary-Americans scams. She isn't your granddaddy's politician, that's for damn sure. And it's about time.