As an update, my daughter's foot is healing well. Thanks to the tetanus shot and a prescribed antibiotic, there was no infection, although she did not at all heed the doctor's instruction not to get the foot wet. She put liquid plaster on the worst cuts, covered them with Tegaderm waterproof dressings, and went on her way. The wound was none the worse for its immersion in the ocean and in chlorinated pool at their Airbnb, which in terms of Instagrammability did not disappoint. By all verbal and social media reports, the bride and her eight-member bride squad had a wonderful time, though they were scammed pretty hard on the second day and after tense negotiations had to pay $300US for a towed car. They made up for it on a boat trip the next day, which by all accounts was sublime. 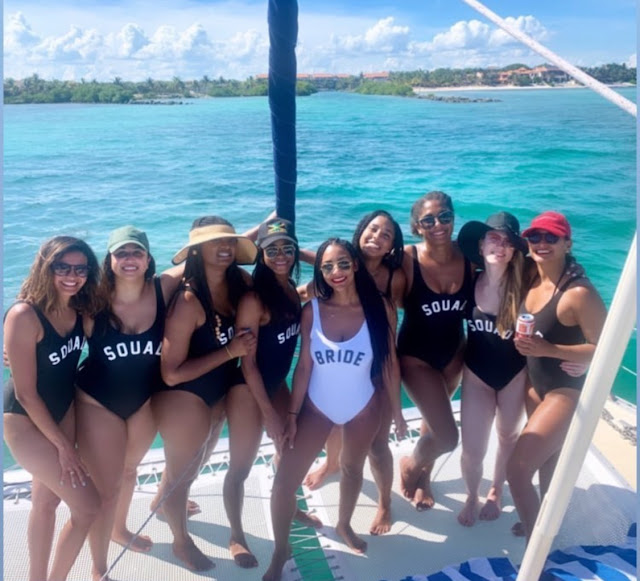 Some of the squad picked up a bug on the trip, most likely in an airport, and seven of the nine came down with the flu just hours after returning home. My daughter has been home with a fever, headaches and body aches all week, though she's on the mend now, and even worked from home the last two days. Luckily, she has a sympathetic boss. She loves her new boss, by the way. Among workplace blessings, that's a big one.

In other news, I'll be heading to DC next week for the big kickoff meeting on the book, at which I will meet the acquiring editor for the first time. I'm nervous of course. I wouldn't be me if I weren't. Then on Friday night my cousin and I will fly from DC to Toronto for Aunt Grace's memorial service. My husband and kids will meet us there, as will other cousins from New York, Boston, Vancouver and the Caymans. Aunt Grace will have two send-offs, one in Toronto for her friends and family up north, and one in Jamaica for friends and family there. It will be good to see everyone, the silver lining of family funerals. They're also family reunions. I'm very touched that both my children want to be there with their dad and me. Aunt Grace was special to us all.

This week, I also joined a year-long weight loss group—the same hospital-based one I embarked on in 2017 and lost 50 pounds. This is an alumni group, for people who already did Year One who still have more weight to lose and want to bottle the magic a second time. This new group is a bunch firecrackers! It's the first time the program is running an alumni group, and most of us have regained some of the weight, as happens. I, too, had begun creeping back up, having regained 12 pounds, but now I am turning that ship around, though I won't pretend I'm not struggling. But I'm excited, too, to get to know this group. The first meeting felt a little like the first day of middle school, everyone eager and hoping to be folded in, and since each person there was familiar with the fat person's sense of being a social outsider, we opened our hearts and welcomed each other in. It's hard to describe, but it felt like such a generous space. We all already know the nutritionist and the exercise physiologist, who is also the medical director, but the therapist is new, and she seems very emotionally aware. I think it's gonna be a good year!