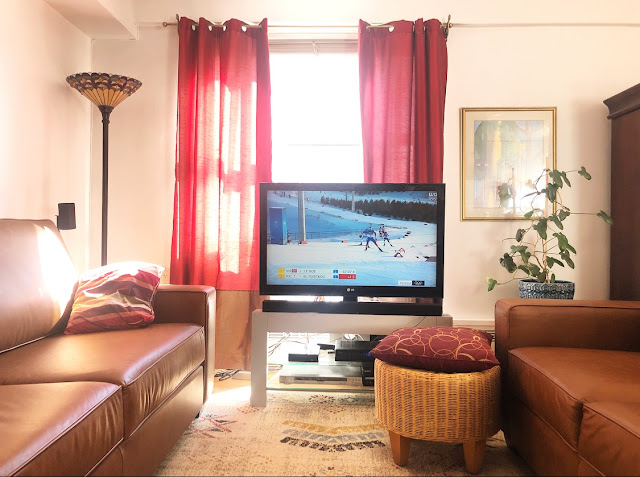 Things are in process over here. New floors are laid and—as I am realizing I tend to be when confronting the new—I was underwhelmed, because the patterns on the planks flowed so seamlessly together, the joined edges invisible, that it looks like one continuous floor, which was not at all what I imagined. Perhaps I should have done more research, and chosen a plank style that was more varied, but now it's done, and it's a visually clean look and easy to care for, so I shall accustom my eye in time. Both my children have tried to assure me that I am holding on to an old aesthetic, and this seamless look is the new style for floors. At least they're enthused.

Then last Friday the couches came, and that was a drama in itself. The longer couch could not fit in the elevator because of a tiny bar near the top from which the maintenance people hang the protective padding during furniture moves. The delivery guys then suggested carrying it up the stairwell, and they succeeded in getting it up to the fifth floor, where we live, even though they are not supposed to carry furniture up more than three floors. Alas, they could not get it from the stairwell into the corridor as the ceiling at that spot is low. Every time they tried slanting the couch through the doorway, no matter the angle, the leading end hit the ceiling before it could be stood straight up. And so the poor delivery guys had to carry the thing back down the five flights of stairs.

Our best remaining option was to call an operation known as The Sofa Guy, which specializes in dismantling furniture that won't fit in New York City elevators, and putting said furniture back together once inside the apartments. The Sofa Guy crew arrived two hours later. While we waited for them, my husband was obliged to sit with the wrapped-up couch in the basement, where the first delivery crew had been forced to deposit it. The Sofa Guys definitely knew what they were about, because within a half an hour they had unbolted one arm of the couch, moved it into the elevator and brought it up, then reassembled the whole thing impeccably in our living room. We had to pay quite a bit extra for that service, and were also poorer from giving some consideration to the first delivery crew, who though unsuccessful in their endeavor, had tried mightily.

Once all that was behind us, I realized that I had misjudged the scale of the couches, not the length, but the depth. They take up a bit more space than I had anticipated, so now I am trying to figure out how to decorate around them to help balance their bulk. I will say they are handsome and exceedingly comfortable, so there is that. The picture here shows the current arrangement of our living room. I am making peace with the fact that while I know how to edit a manuscript and write a book, I am not a skilled or intuitive interior decorator, and I need to be okay with that.

My husband bought that pretty new blue ceramic pot for the plant, the best evidence yet that he's engaged in this process. I plan to change out the old cushions with lighter colored, less red-toned ones, and the curtains for something in the ivory family. Since there is no way to center the TV in front of the window, a less dominant curtain color might be help the eye not focus too much on the lack of symmetry. I might also get a new TV console at some point, but I am trying not to hyperventilate about all that, and allow myself to take things a step at a time. After all, I still have work to do. In fact, I have decided not the move forward with the kitchen re-do until I have a completed first draft of the book. Apartment renovation is disruptive and loud, though so far, our contractor has been great.

I had another interview with my book subject on Sunday, and she begged me for a sneak peek of the manuscript. I agreed to send her Chapter 3. I actually added another scene to that chapter right after I sent it, which is why I never like to show anything till I have a full draft. I'm always going back and revising, layering, adding, streamlining, but the good news is she loved the chapter, which she told me in a text with many exclamation marks as she was running through an airport on her way to Cincinnati. She is always traveling somewhere, this one. She is in another city practically every couple of days. I watch her social media posts and feel dizzy. I'm going to hit seventy thousand words today. Fifteen thousand more to get to our contracted word count. We will definitely make it. Perhaps more.