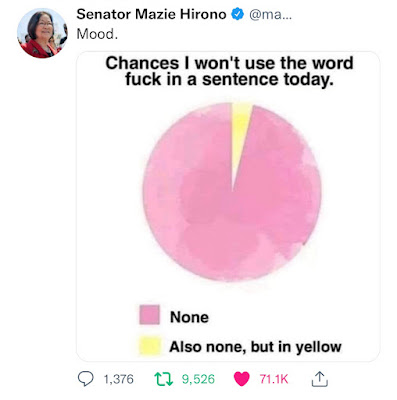 My daughter and her love flew in last night, and were gone again this morning, on their way to Atlanta to see their friends get hitched. They'll be back in the city permanently four days from now, moving into their new Brooklyn apartment, and I am so ready for that. And tonight, Arrindell Arms will throw open its doors to yet more company—the Jamaican cousins. it's turning out to be a fairly eventful socializing time for our family, and work is fairly intense, too.

In far grimmer news, the regressive Supreme Court this morning reversed Roe v. Wade, allowing states to deny women the right to make their own reproductive decisions, to govern their own bodies, to exercise sovereignty of self in their health care choices. Now, in some states, women can be criminally charged with murder if they abort, with no exceptions for rape, incest, or even ectopic or non-viable pregnancy, cases in which abortion is necessary to save the life of the mother. Women can be charged with a felony even if they are simply wearing an IUD for contraception, and if they accidentally miscarry, they may be forced to prove that the loss was an unintentional event. Doctors, too, can be jailed, as well as anyone who helps women access this form of health care, and all manner of other insane Handmaid's Tale-type scenarios are already being legislated. Significantly, the majority decision was based in part on the right to abortion not being encoded in the constitution, which means there are many more rights that the court can now take away by using this case as precedent, rights like same sex marriage and the use of contraception for starters.

It makes my head explode that the law is forcing women to give birth in a nation that does not support women in choosing to have an unplanned child; there is no universal health care, no universal child care, no paid family or medical leave; we have one of the highest maternal mortality rates in the so-called developed world; and lawmakers have no interest in the life and welfare of the mother or the child once born. This is not about any religious belief and faith. This is about the subjugation and control of women, through the subjugation and control of their bodies. The only hope is for voters to install a sufficient Democratic majority in both houses of Congress in November so that some reparative action might be possible. If the Republicans gain control, they have pledged to pass a federal law banning reproductive choice everywhere

I don’t even feel like leaving up this post. It all feels so enraging and mind bending right now. As my friend Maryam cried into the void—Where is our revolution?!