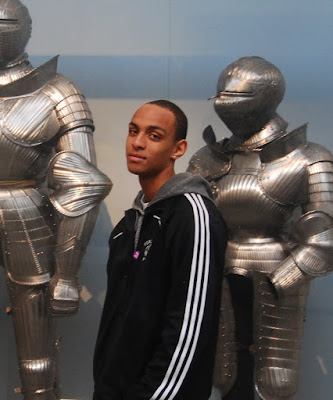 You know, I bet my son's guidance counselor found a way to work into his college recommendation that he is the grandson of a knight. Not many Black boys in America can claim grandpa was knighted by the queen herself, that for his grandpa's good works, her royal highness laid a sword on his shoulder in a great room at Buckingham Palace and dubbed him "Sir." My son is so like his grandpa was. They have the same core decency, both pranksters with a lively sense of humor, with the same sensible, methodical approach to problem-solving, and an unequivocal personal code of ethics. My son was just four when my dad died, but in those four short years they laughed and played and were so wonderfully silly together. Then, when my dad was ill and bedridden at the end, his legs paralyzed, the cancer marching through his body, my son would pour oil onto his little hands and massage my dad's feet. They were such comrades.

I can imagine my dad, pulling strings from heaven, his eyes merry.
Posted by 37paddington at 1:19 PM