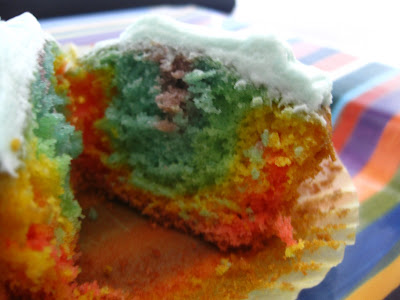 My daughter is a cupcake baker extraordinaire. She bakes her cupcakes from scratch, and makes the icing from scratch, too. She trolls the internet for interesting sounding recipes, and tries them out, making them several times over the course of a few weeks until she's satisfied with how they come out. Then she adds the recipe to her recipe book and takes close up photos of the results for her records.

The cupcake above, which she was making for the second time, is a rainbow cupcake with blue buttercream icing. She made it to welcome her brother back home, but he was too jetlagged and sleepy to whoop about them last night. He made up for it at breakfast this morning, raving about them and interviewing her about how she gets the rainbow effect. Overhearing them, I gathered that she separates the batter into six portions, colors each portion (red, orange, yellow, green, blue, purple), then pours a portion of each color into each cupcake paper. The icing this time was blue, last time it was pink. The cake was light and crumbly and delicious. Success!

My girl sometimes says she wants to be a baker and a food photographer. She got into cupcakes because when she would make cakes, her family would devour them too quickly. She decided single serving portions was the way to go. My son says he'll finance her bakery as long as he can forever get her cupcakes for free. He even boasts about her cupcakes to his friends at school (which I find touching). One of them began calling daily to find out if his sister was baking that day. On the day he found that she was, he said, "I'll be right over!"

My personal favorite recipe of hers is key lime coconut cupcakes with vanilla icing. Never tasted anything like it.
Posted by 37paddington at 11:53 AM