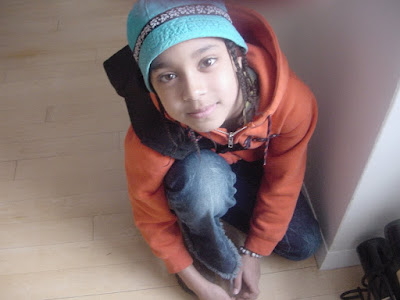 My daughter, above at age 7, contained her excitement enough to allow me to take this picture. It was the morning of her first 5-day trip with her class to her school's farm. She had just started third grade, and she was not at all nervous about leaving home for a week. You can see the embrace of adventure in her eyes.

This picture reminds me that the soon-to-be 16-year-old girl who is determinedly applying for a culinary program in Italy this summer has been a bold seeker from the start. Initially, she wanted to spend her junior year in a language immersion program in Spain. It was a year-abroad facilitated by her school, and she pleaded with us for days, showing us lists of the top notch colleges the program's graduates got into. But we said no. As her dad put it, we have two more years with her before she leaves home, and there is much we still want to say to her. We're not about to give up one of those years. But then her scholars program sent information on a summer program in Spain, bringing the opportunity back in a format we could possibly embarace. As she investigated the Spain program, she discovered that the organization offered other group travel experiences, including two culinary programs in Italy that had no language requirement.

The Italy program she's most interested in begins with a few days in Rome, then a 2-week homestay in a village called San Sebastiano, then 2 weeks at a culinary school in northern Italy, then the members of the group spend the final week in Venice sampling the city's sights and culinary delights. She had to write three 500-word essays and answer a million short answer questions for the application. But she did it. She's clearly motivated. I have my noisy-brain worries, of course, but if she is accepted into the program, we are going to let her go. Her scholars program sends 2-3 kids abroad with this outfit every summer, and they appear to be well organized and supervised. When our girl was trying to convince us to let her spend five weeks in Italy without us, she entreated, "Mooommm! I have to find out if cooking is my hobby or my life!" It was such an authentic outburst. That was the moment I said yes in my own mind, and resolved to help her convince her dad.

Today, I sign the forms that say we're okay with her traveling abroad with this program. I look at the photo above and it reminds me that our girl has been ready from day one to take on the world.
Posted by 37paddington at 12:23 PM