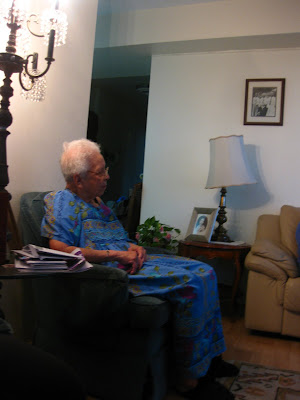 My 92-year-old aunt has been having hallucinations for the past several days. She sees a man in her room, sitting in her chair, wearing a black suit, and he won't leave when she tells him to. When we tell her that we don't see the man she is pointing to, she gets angry with us, because after all, there he is sitting right there, what is wrong with you all?

Last night, she refused to go to bed. She refused to get out of her chair because that damn man was just going to make himself comfortable there, and how dare he come into her room and act like he belonged there. And so she sat well into the midnight hour, ignoring the entreaties of the home attendant, who offered to hit the man over the head with the quad cane if he showed up, if my aunt would just get into bed. My mother was beside herself, her voice quavering as she said, "I don't know what else to do." But then she had the idea of offering my husband to go over and chase the man out of the apartment. My aunt brightened, liking the idea.

So at almost midnight my husband pulled on his shoes and a jacket and went over to my aunt's apartment. He didn't engage the man, though. He just sat with my aunt, exchanging rambling talk for close to an hour, not mentioning anything about the man. At last my aunt was tired enough so that my husband was able to coax her into bed.

But at around 5 a.m. this morning, the home attendant found my aunt on the floor next to the bed. She had tried to get up on her own and had fallen. The home attendant called 911. My aunt has now been in the ER all day. Her son is there with her and so is the home attendant. We still don't know if my aunt will be admitted. My mother has been on the phone with me at work for most of the afternoon. She is worried sick about her big sister and feeling rather fragile, so I am heading over there now.

Curiously, when her daughter was still in the house, my aunt's hold on the corporeal world seemed stronger. Since her daughter left, she's been drifting, here but not here as her pacemaker keeps ticking away. Her daughter is now in an outpatient program to get sober and will soon be settled in permanent housing. I think my aunt has finally released her to her own life.

Last night she told my mother, "I'm ready to travel now." At least that's what my mother thinks she said.
Posted by 37paddington at 7:30 PM