One more game to win it all 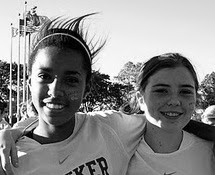 My daughter's soccer team won their semifinal game yesterday, 4-0, and are headed to the final Championship game on Monday! It is actually happening just the way my girl described it could. Her team is like that underdog team in high school sports movies who no one saw coming, and then they start winning and winning. Ooooh, I have goose bumps as I write this!


Despite work demands, my husband and I made it to the 3 p.m. game at Ichan Stadium, where my girl scored one of the four goals. It was a perfect blue day next to the river on the best soccer field in the city. Now our girls get to play on the really top-flight field! Did I mention that their usual field in Brooklyn is scattered with discarded wrappers, bottles and cans that they have to clear before every practice. Did I mention that the wealthy private school teams who travel there for home games are always appalled? Our girls are a scrappy bunch!

They were ecstatic after yesterday's game, but their coach kept it modulated, their eyes on Monday's prize. The handful of parents were beaming with bewildered happiness: Who knew at the start of the season that we would be in this place? On Monday our team will play the winner of the game that was up after theirs, so the girls all trooped into the stands to watch and strategize. The two teams on the field looked pretty darn fast and fierce. They definitely won't roll over. Our girls will have to really win this thing.

An interesting side note: My daughter's school this year hired a new director of athletics to oversee all the sports teams. According to my daughter, "He's doing a pretty good job actually." She says he's upped school spirit in simple and inexpensive ways, like buying paste on tattoos with the school's name and mascot that the girls all had on their cheeks yesterday. They also each had a maroon streak of color in their hair (maroon and white are their school colors).

The athletic director is also renting fan buses for Monday's game so the girls will have a cheering section larger than the few parents who can manage to get away from work. And he instituted a superfan contest, which was a student card that got punched for each game attended, with the winners earning team jerseys at the end. And the part my girl likes best of all—swag! For the first time ever, in addition to their game uniforms, the girls got hoodies and sweatpants and jerseys with their team name and number on the front and surnames on the back. My daughter wears these items all the time at home these days. She even sleeps in her team gear. In the end, it all comes down to feeling as if their effort is valued. I think that new guy is onto something.

Update on November 2, 2010:
Our team lost last night, 3 goals to none, so they won't be bringing home the championship cup—this year. They played like champs, though, passing and dribbling with great ball control and really staying in the fight against a very strong and experienced team. Our girls just needed to take more shots on goal, to convert and finish. But they have an excellent goalie who is a freshman, and very few seniors, which means most of this team will be together again next year, so they can work on that. And they now know what it feels like to win, and they now know that they can. Look out world! Stay tuned.
Posted by 37paddington at 10:20 AM