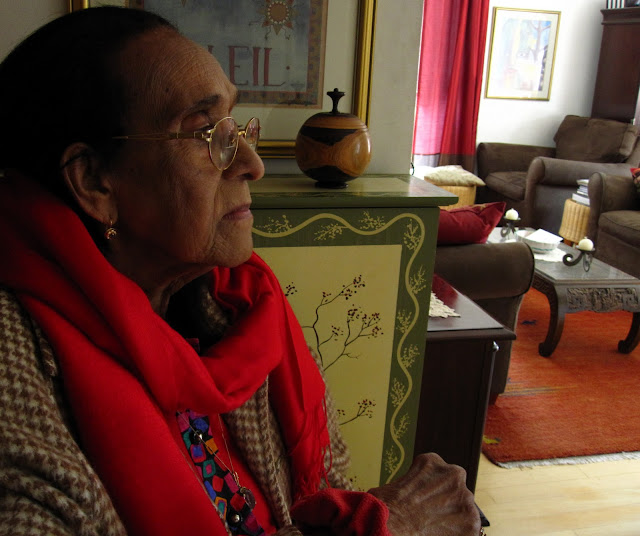 My mom left today. She is on her way to Jamaica to my brother's home where she will be for the next three months. A family friend who had come to New York for a wedding this past weekend, traveled with her. She is, finally, too frail to travel alone. She was exhausted just from the task of getting ready this morning, and from the packing, which has gone on for three days straight. It tired her because she couldn't trust herself to remember everything, and so no matter how many times I assured her that I had already packed an item or taken care of a detail, she still had to check it again. I could see her running up and down her mental list, flustered by the certainty that she was forgetting something crucial. I was exhausted myself, and doing my level best not to be irritable. Because I knew the moment she was wheeled onto that plane and out of my sight, my eyes would sting, my center would knit from missing her.

She was stooped over this morning and also bent to one side. More stooped than she has ever been, and she couldn't make herself stand straight. I helped her into her clothes, trying not to make her feel self-conscious or worried at how breathless from exertion she was, how shaky on her feet. She kept pulling small things from drawers and closets, things she had always left behind before, and I knew it was because she thought she might never come back to her apartment here, that she was saying goodbye to it for good. We both pretended, though. I told her I would come and get her when the weather turns back warm. She smiled and hugged me and said nothing.

We were late leaving for the airport because the getting ready couldn't be rushed. But still she insisted on going upstairs to say goodbye to her sister. At 88 and 92, they know each goodbye just might be the last, and of course, the tears came after. But the goodbye itself was a thing of wrenching beauty. My aunt thought my mom was already on her way, that their leave taking of the night before would have to suffice, so when she heard my mom at the front door, she was out of her chair and shuffling towards us at a pace we hadn't seen in years. Her face was alight with pleasure, it made me think of a child's innocence and wonder, it hurt to see it, the simple joy of seeing her sister one more time. They hugged each other in that careful way that their complaining joints allow, and held each other's faces in their hands for a long time. Just smiling and looking into each other's eyes. Beaming love. I wanted to take a picture but knew it would be an intrusion. And I knew that as long as I live I will never forget the sight of such love.
Posted by 37paddington at 4:19 PM