Eataly and such pleasures 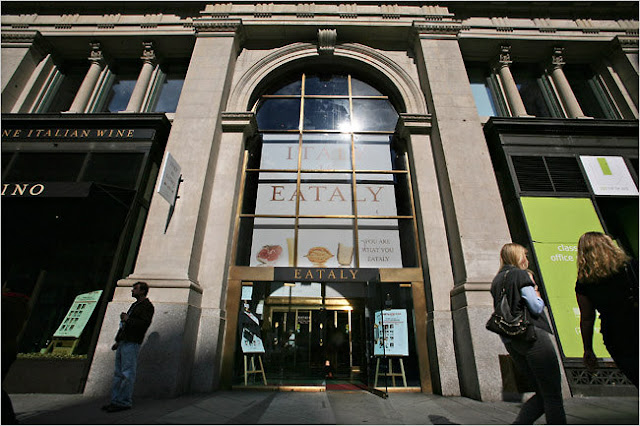 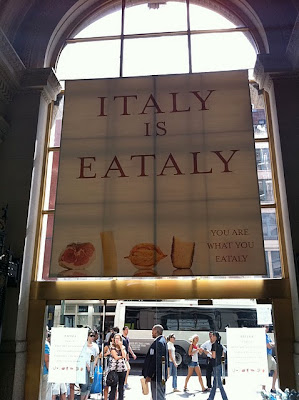 My daughter and I finally made it to Eataly last weekend. That's the Italian food mall, more like holy ground for foodies, that opened on Twenty-third Street a few months ago. My daughter visited the original Eataly when she was in Italy last summer, and heard then about the one that would soon open in New York. She could hardly wait. And then school started and she was swamped with homework and soccer, and I was occupied with my mom and long story short, it took us this long to get there.

After waiting in a line that went around the block (the line moved quickly, admitting twenty-five customers every five minutes) we stopped for gelato, vanilla hazlenut for me, lemon and raspberry for my girl. Then we meandered through the aisles full of gorgeously packaged foods and fresh ingredients, with my daughter reliving her experience last summer as she happened across items she had used at the cooking school in Asti or learned about as part of the Slow Food Movement she was studying. It was fascinating to watch her pick out fresh produce, the way she tested one tomato and set it back down, then another, then chose the third. The way she held the asparagus up to the light, the sure manner in which she passed the sage in front of her face, then rolled her eyes heavenward with a sigh of pleasure. None of this sort of food play had ever been remotely thrilling to me, but on this day I got such joy watching the way natural food speaks to my child. 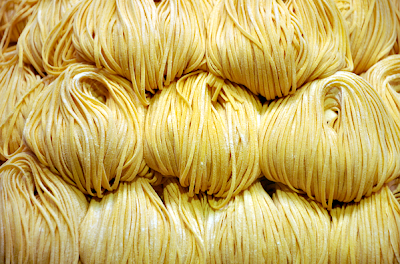 The best part was when we stood at the pasta counter so she could order freshly cut spaghetti. The people behind the counter seemed to move in slow motion, even blinking in slow motion, which no one seemed to mind. As we stood there waiting for the woman behind the counter to package our two bundles of spaghetti, wrapping it up in brown paper with as much care as one might handle an expensive gift, the man standing next to us smiled knowingly, then asked how we planned to cook the pasta. I pointed to my daughter and said, "She's the cook." My daughter answered that she was going to just toss it with freshly made tomato sauce and maybe some basil, and he said, "You know what would be great? Saute some sage in olive oil, don't be shy with the sage, but watch it so it doesn't start to get brown, then mix that in. And take a handful of salt, this much"—he opened his palm and drew a circle to show how much—"and toss that into the pasta water when it starts to boil. The spaghetti will drink it right in and give you great flavor." My daughter asked for a couple of clarifications as I stood aside and enjoyed her delight at exchanging cooking notes with an obviously seasoned chef. Afterwards, when we went back over to the produce section to get the sage, my daughter and I both had the feeling that we recognized the man from the Food Network. That made it one of those serendipitous New York City experiences, a brush with celebrity that was generously human and sweet. 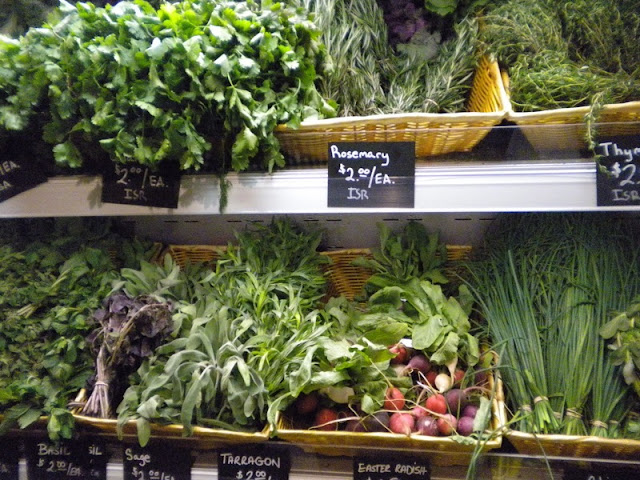 Back home, my girl whipped up the sage infused olive oil just as the man who might have been a Food Network chef had instructed, and mixed it into her pasta. It was delicious! My husband and I enjoyed the pleasure of our daughter making dinner for us. It was all ready in barely any time at all, from which I learned that fresh pasta cooks in three or four minutes, not the 20 minutes or so it takes to rehydrate the pasta I'm used to, and then cook it. This is something real foodies know, but I had no idea. I learn so much from my daughter.

On another note, the college kids arrive home for Thanksgiving break tomorrow night. I can hardly wait to look into their eyes, hug them.
Posted by 37paddington at 6:08 PM