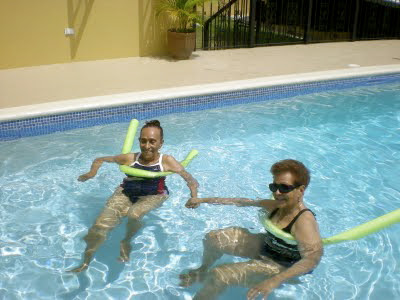 One of my blog sisters posted this poem a few days ago, and it just climbed inside me and made a home. It's my mother and her five sisters. It is them exactly. They are in their eighties and nineties now, and after a lifetime of devotion to one another such as I have never witnessed again, they can no longer travel to be together. But they talk, a round robin of phone calls, every single day. They are each other's "alternate me." The photo above is of my mom and one of her sisters in my cousin's pool in Jamaica two years ago.

I Wish I Had More Sisters
Brenda Shaughnessy

I wish I had more sisters,
enough to fight with and still
have plenty more to confess to,
embellishing the fight so that I
look like I'm right and then turn
all my sisters, one by one, against
my sister. One sister will be so bad
the rest of us will have a purpose
in bringing her back to where
it's good (with us) and we'll feel
useful, and she will feel loved.

Then another sister
will have a tragedy, and again
we will unite in our grief, judging
her much less that we did the bad
sister. This time it was not
our sister's fault. This time
it could have happened to any
of us and in a way it did. We'll
know she wasn't the only
sister to suffer. We all suffer
with our choices, and we
all have our choice of sisters.

My sisters will seem like a bunch
of alternate me's, all the ways
I could have gone. I could see
how things pan out without
having to do the things myself.
The abortions, the divorces,
the arson, swindles, poison jelly.
But who could say they weren't
myself, we are so close. I mean,
who can tell the difference?

I could choose to be a fisherman's
wife, since I'd be able to visit
my sister in her mansion, sipping
bubbly for once, braying
to the others, who weren't invited.
I could be a traveller, a seer,
a poet, a potter, a flyswatter.
None of those choices would be
as desperate as they seem now.
My life would be like one finger
on a hand, a beautiful, usable, ringed,
wrung, piano-and-dishpan hand.

There would be both more and less
of me to have to bear. None of us
would be forced to be stronger
than we could be. Each of us could
be all of us. The pretty one.
The smart one. The bitter one.
The unaccountably-happy-
for-no-reason one. I could be,
for example, the hopeless
one, and the next day my sister
would take my place, and I would
hold her up until my arms gave way
and another sister would relieve me.