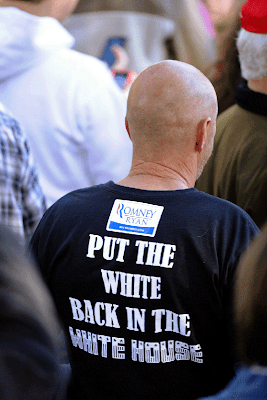 I really think the 24 hour news cycle is toxic. These pundits and talking heads yap and opine and whine incessantly, filling the endless minutes with a manufactured narrative, depending on the political bent of the news channel. Forget the Super Pacs and their flood of money and trash political ads, it's the 24 hour news cycle that is really going to decide the fate of the nation. They're going to decide it by what they cover, and what they ignore, by what they screech about, and what elicits nothing more than a shrug. Like the man in that tee shirt, for example. Why on earth is that okay? Oh right. Free speech is protected. No matter how hateful.

People who didn't watch the first presidential debate or the vice presidential debate think they know what happened. They've watched the news clips, they've seen MSNBC's Chris Matthews so operatically offended by the president's low-key civility in the first debate, they've heard Fox News commentators speculate on whether Joe Biden was drunk or suffering from dementia (he doesn't drink by the way) in the VP debate, they've dissected swing state polls ad nauseam, and I am so very tired of the prattle and hype, and dismayed by the degree to which people take what amounts to sensationalism and entertainment, as facts.

Speaking of facts, or the lack thereof, why isn't everyone deconstructing the misrepresentations and lies issuing from the Romney-Ryan camp? Why are pundits mildly amused by Republican senators who imply or flat out insist the positive jobs numbers last week were tampered with? Why won't commentators call the assertion what it is—outright treason. Why aren't they calling out the hateful tone of the Romney-Ryan base? Why aren't they jumping up and down about the efforts to disenfranchise anyone who might cast a ballot for the Democrat, an open, galling, in-your-face campaign to steal the election from voters.

You already know my political bent, and if you don't it's not hard to discern. But I think the whole tone of the media narrative right now is irresponsible in the extreme. Only a few commentators are making sense to me, young guns like Rachel Maddow, Chris Hayes and Melissa Harris-Perry, who are doing the research and putting actual thought into what they report. As for the rest, let's just say I'm talking back at Joe Scarborough and his circle of men in suits on Morning Joe this morning. God, there's just so much noise.

Update: Well, the Supreme Court upheld early voting in Ohio today, so kudos to them. I have to admit I thought they'd strike it down, especially since those bringing suit  to preserve the right cited Bush vs. Gore (oh, the irony). Happily, I was wrong. Still, I wonder if I can bear to watch tonight's presidential debate? I'm not detached enough, not remotely close to achieving the proper state of zen. Oh, who am I kidding? I will be watching anyway.