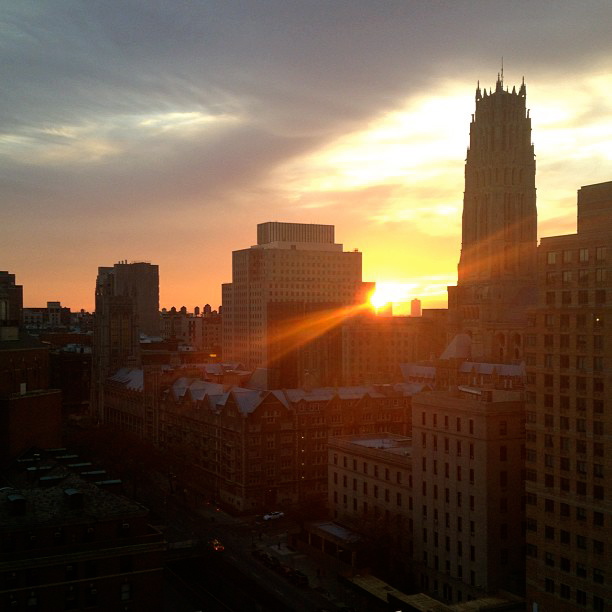 It was a good weekend, the house straining at its seams with people from all the different corners of our lives, family members, college friends, childhood friends, raised-our-kids-together friends, and some who we were meeting for the first time, like my son's friend's friend who spent a summer with her in Israel and came into the city from her home in Long Island to meet her college friends. We went to the movies, the teenagers went Black Friday shopping, we ate leftovers and watched season one of Homeland, and every so often I looked around the house, at the towels piled on top of one another in the bathrooms, everyone's cosmetics crowded together on the shelves, the kitchen counter covered in food and drink and just emptied dishes, the sink perpetually full, the dishwasher going continuously, and the living room, rearranged for Thanksgiving, with pillows and cushions scattered on the floor, and bodies stretched out everywhere. Throughout, the college kids came and went, their animated talk and laughter announcing their arrival or trailing them down the hallway, and the younger cousins watched them leave and leave again, their eyes wistful, a feeling I remember so well from waving goodbye to adored older cousins in my own adolescence, and it occurs to me now how similar it feels when I wave goodbye now as a mother.

The college kids left first, falling over one another at seven this morning, a jumble of movement, stuffing clothes into bags and flat-ironing hair and pulling on sneakers and throwing used towels into the hamper, basketball style, and before I knew it they had assembled at the front door, overnight bags in hand, hugs and kisses all around and more goodbyes called down the hallway as they disappeared into the elevator, voices weaving happily because is there anything happier than to be with your friends heading off together when you're 21 and 18?

The rest of us watched more Homeland episodes, but for my church man, who went to services and then a vestry meeting, and in the early afternoon the rest of the cousins hit the road back to Columbia, Maryland, and the only one left now is my cousin who lives in Trinidad, who will be here until Tuesday. After finally marshaling the energy to clean up the kitchen and put everything back where it belongs, we are having a deliciously slow second half of the day, my cousin reading on her paperwhite, me watching Brothers and Sisters on Netflix, and my husband cheering and groaning over the Saints and the 49ers, depending on what's happening in the game. The sounds he makes, which broadcast how his preferred team is doing, are the ones my daughter says she most misses as the backdrop to her Sundays. I know what she means. Somehow those sounds convey all is easy and right in the world, at least in this little world we sometimes manage to inhabit on Sundays, when nothing needs to be more serious than football.

My son took the photo above from our apartment complex at dusk on the Friday after Thanksgiving. It reminds me of that song by The Wanted, which just about sums up how I'm feeling: