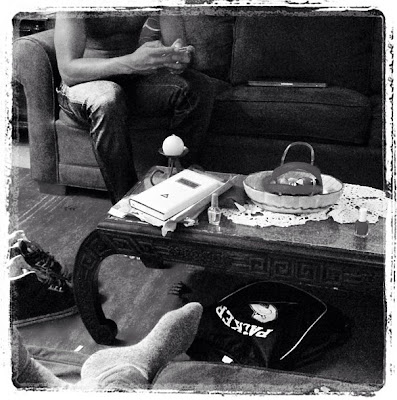 I am a little overwhelmed. You would not believe the amount of stuff that travels with a college student home for the summer. They have had a whole life set up away from the little apartment where we live, all the artifacts of a home away from home, and now all those things, packed in bins or spilling out of suitcases and hampers, are just...there. My kids rooms look like a tornado swept through, and there simply isn't anywhere to put the stuff. Sure the clothes have been/will be repacked in drawers, and hung in the closet, but the comforters and lamps, the winter wear in plastic bins, the books, the random things that I can't even identify, where do they go? I am stepping over and around everything, and averting my eyes, and I clean the kitchen and tidy the living room with manic intensity, desperate for a corner of order in the house. But they are spread out into the living room too, my son's tee-shirt and shoes shucked off, socks soon joining the mess, books and cups and nail polish and magazines and laptops propped on every surface, comforters they wrap themselves in while watching TV trailing on the floor.

I've been trying to ignore it. The alternative is to bitchbitchbitch and they just got home. I'm trying to allow them to enjoy their reentry. I'm trying to just let life happen. At some point I suggest they clean up after themselves and they do. But I'm trying not to be the OCD police about it. And hope springs eternal that they'll just do the dishes and pick up after themselves without being prodded. People who live in houses with basements and attics and guest rooms and extensive counter space and closets are probably not so overrun, but we live in a small apartment and there is no space for anything extra, and I'm not sure what to do other than live with the chaos until summer ends and one of the two packs up her gear and moves back into the dorm, and that's not a moment that I want to arrive sooner than it has to. The other one will have to discard and give away a lot of what he brought home. There's just no other way that I can see for this to go.

This morning as I left for work, they mentioned that this friend and that friend might be coming over and I looked around the house, not quite believing they were contemplating actually bringing people into the mess, but I just shrugged and said, Sure, just clean up a bit will you? And they said, We will. And I know I might not notice any difference when they're done. Except my son did all his laundry yesterday, an impressive mountain of clothing, and he folded every single item, the neatness almost militaristic, and this morning he placed the folded clothes in careful piles on his desk (no, not yet in drawers), and that was something, a definite intentional start. But there are other items of clothing still strewn around his room. Are they the clean stuff? The stuff to be donated? How can one person have so much stuff? So yes, I avert my eyes.
Posted by 37paddington at 1:04 PM