Summers Past and Present 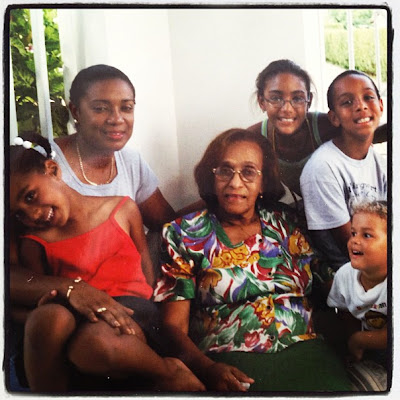 We're going to Jamaica over the Fourth of July weekend, because my mom isn't doing so well. She's confused lately, not knowing what time of day it is, thinking she is in Spanish Town, which is where she lived with my dad just after they were married, and forgetting she can't just get up and walk, which means they find her in precarious positions on the edge of the bed when they come to help her in the morning. She's also been seeing some man at the door, and tells the women who help care for her to close the door because he's out there again and please don't let him in. My niece, who is now back in Jamaica after completing a one year masters in biomedical sciences (she's heading on to dental school in the fall), texted on Sunday night, asking nervously when were we coming to visit. I called her back. She said she thought we should come sooner rather than later, that Grandma was sleeping a lot and she didn't know what was up with her. My brother says it could just be the cough medicine she is taking for the upper respiratory symptoms she has, but it is apparently also possible that she has had a mild stroke. She is going to the doctor, so we'll hopefully know more soon.

I called my son just now to let him know that we would be traveling. He spent his spring break with his grandmother, so I'm at ease with the fact that he won't be able to go with us. The kids arrived at camp two days ago, and as unit director he has his hands full. He's overseeing the counselors now, instead of being one himself, and he has to look out for 32 kids instead of just 6 or 7. I asked him how it was going and he sighed. "It's sad," he said. "So many of these kids are medicated. At least 15 of them are on ADD meds, and some are on anti depressants, and I can see so clearly how much some of them need it, and I so wish they didn't." It's hard to have the overview, he said. When he was a counselor he just dealt with the kids as they presented themselves, but now he has their files and knows their backstories, the ones in therapy, the ones on antipsychotic meds. "They're so young," he said. "And the meds just make them zoned in and fogged out." Then he added, "We'll make sure they all have a good time anyway."

I asked about the counselors. He said, "They're fine, a little lazy. I kind of have to stay on them. But they'll be okay. They have to be because I can't do it all, which as you know is my inclination." It's true. He's super responsible, this boy, especially when it comes to a job to be done. I said, "Each step up the ladder adds complications, doesn't it?" and he laughed. Right then someone came along and I heard him say, "Talking to my mom," and then he handed this person, a young woman, the phone. She said, "Hi, I'm Kim! Nice to meet you! I promise we're taking care of your son!" Since there were exclamation marks at the end of her every sentence, I thanked her warmly and we said a cheery goodbye and she handed the phone back to my son. "That's one of my good friends here," he said. "I like her a lot." So that's how his summer is going.

My daughter got herself a second job as a hostess at an organic foods restaurant. She started today. So now she is super busy juggling her schedule for that and the increasingly major stories she is writing for her internship. I'd link her stories except her byline is on them, and I had promised when I started this blog that I would not use my children's names here, even though you know so much else about them. The photo above is one my mother keeps in her Bible. I snapped this blurry copy of it when I visited her in March. She's with her grandkids on the front porch of the house in St. Lucia, during Grandma's Annual Summer Camp. My kids are 6 and 8 here. My niece is 10 and the littlest one is 3. I remember I took the picture. The kids were on their way to the beach.