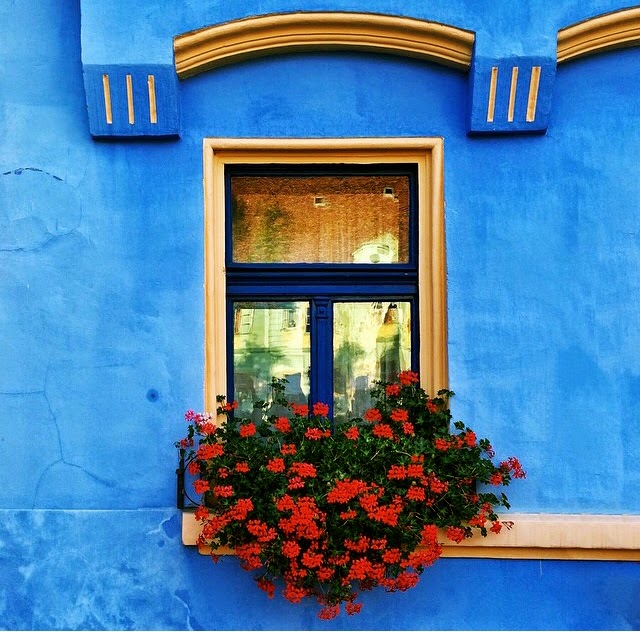 I love the blue of the wall in that photo. It reminds me of the sea.

I took myself to the movies yesterday afternoon, saw American Sniper and did not enjoy it. Came home and had a good discussion with my son about why that was. He suggested that because the main character was not transformed in a way I could understand, I was left unmoved. He knows me well. I reflected that I wanted some acknowledgement of the futility of war—in particular that war—and some comprehension that 160 kills cannot help but tear the human soul. My son was not unmoved. "That's real life," he said. "People are usually not transformed to some higher mental place by war. In fact they're usually fucked up more. I like that they didn't put a gloss on that."

He told me a story about a marine who had waited outside of movie theaters to question patrons who had just seen American Sniper. This marine would ask the patrons what did being a hero mean to them. Invariably, he got this answer: "It means fighting for your country and being willing to die for your country." To which this marine responded, "By that definition, the people we are fighting against over there are also heroes. Did you ever think of that?"

My boy was in a lovely mood with his mama yesterday. Sometimes we get on so well.

I also had fun watching the Oscars with my friend TheBrittany_Be, with whom I traded tweets all night. She kind of made my night, just by being her smart, fem, wry self. (Favorite tweet: "Lets make popcorn and subvert the patriarchy.") As for the Oscars themselves, I think Neil Patrick Harris was tone-deaf as a host. Bring back Ellen, please, or maybe Tina Fey. The low point for me was when NPH appeared on stage in his tighty whities. Um, really? And that running gag about Octavia Spencer watching his lockbox was just deeply uncomfortable. ("You sit right there, no bathroom breaks for you, no snacks," he actually told her. Who did he think he was talking to? The Help? Why didn't he ask Clint Eastwood to watch his damn lockbox?) The high points for me were Common and John Legend singing the anthem "Glory," which they wrote for the movie Selma, and which won Best Song, and Lady Gaga showing off her extraordinary pipes in a Sound of Music retrospective. (Sound of Music was my mother's favorite movie of all time. We watched it again and again when I was a child.)

And now it is Monday morning. It's gray outside and gray inside, hence the photo of that Caribbean blue.