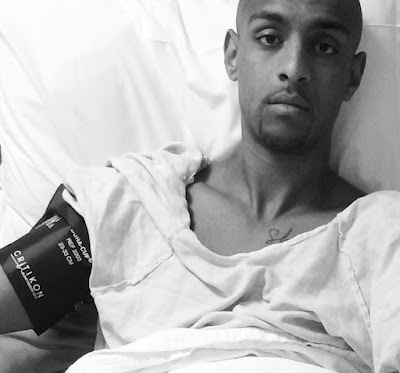 Our boy had surgery to repair his torn ACL yesterday, and when the nerve blocker wore off last night, he was in pain, like tears at the corners of his eyes pain, the kind no prescription can touch. His girlfriend spent the day and night, taking such good care of him. She has a light touch and a gentle humor, and she's really endeared herself to me. She knows a bit about physiology herself, as she's a personal trainer. My son is really quite fascinated by the medical aspects of all this, and he's wondered aloud if maybe he should go back to school to be a physician's assistant or a nurse practitioner (but not a doctor, he said, as we binge watched the interns on Gray's Anatomy study for their boards).

He doesn't love school but he does love medicine. But what he's really interested in is trauma medicine, which is why he says being a paramedic-firefighter might be perfect. "As a paramedic you do everything doctors do in a crisis, but you do it while going 40 miles an hour in the back of an ambulance," he likes to say. He's also said that when everything is falling apart and the world is going to hell, he wants to be the one who can jump into the fray and help to fix things. His dad took the photo of him when he was just waking up after surgery, still a little loopy. I got permission to post it. I didn't worry about how the procedure would go, because my husband was there, and he's such a good man in a pinch. He has such a steady presence, he gives you the feeling that nothing can go too wrong while he's on the scene. Maybe that's what inspires our son to want to be the go-to man in a crisis.

The injury that led to this surgery might have felt like a disaster to me, but to our boy, I suspect it's an opportunity for first-hand research. And the pain is much less this morning. When he keeps the leg still, it's more like a throbbing ache now. Today, he'll be able to adjust the brace and bend the knee 30 degrees. He also ordered ergonomic crutches, which should arrive today—more anatomical research, with a bit of technology thrown in. This boy can tell us everything that is happening inside his knee, and he does. Like how when he gets up and walks on the crutches, the blood rushes to the area and brings nutrients, so that's good, but it also causes swelling and kills muscles, because apparently blood is toxic to the body. "Think about it," he said, "why do people die from internal bleeding? The thing that keeps us alive is also toxic to our insides." If some doctor reads this and it's not quite right, it's on me. I'm sure he said it right, and maybe I garbled it.