I feel like I have ADD lately, which is affecting my ability to write thoughtfully here, but I guess it's okay to skate the surface sometimes on your own blog. I think I just need a break from all the catastrophic thinking that swirls through my brain constantly. Not that it's stopped swirling, but for the moment, I've stopped trying to decipher what it all means. Maybe this is how you live in the moment.

In that spirit, here are some opinions—really more like impressions since I've barely been paying attention—about the current crop of presidential hopefuls.

Donald Trump—I'm convinced he's there for his own ego, masterfully manipulated by Bill Clinton into entering the race, and now he is happily causing chaos in the other GOP campaigns like a fat kid splashing in a mini backyard pool. He's turned the whole presidential race into an over-the-top reality show, complete with helicopter rides at the fair. He's a truly scary dude, though, if you listen to the things he actually says, and when he kicked Latino journalist Jorge Ramos out of his press conference in Iowa, and then one of his entourage told Ramos to go back to his country, even though Ramos is a U.S. citizen, well, I was just done with the bloviating blow-hard candidate. Again.

Jeb Bush—He looks either bored or pained whenever he flashes across my TV screen, as if he's thinking, Do I really have to do this? How on earth did I get myself into this? But when he starts talking I feel as if I'm back in the Dubya years, and his brother is still prattling on about the various wars in the Middle East he started for the greater glory of oil, and the Chaneys and the Wolfowitzes of the party are just licking their lips with glee that they'll get to walk back onto center stage soon. Um, no.

Dr. Ben Carson—I used to absolutely adore this man. I was inspired by his story of overcoming poverty, going from a child in special ed to the top of his class once he got a library card, and then going on to become a world class neurosurgeon at Johns Hopkins who performed the first ever successful separation of twins conjoined at the brain. I even made my son write a paper about him in middle school; I though he was a role model every little black boy should know. But then. The man got into politics. Good Lord, why? He opposed Obama's health care plan saying it took us back to slavery or some absurd statement like that. And then he started sprouting his views and with dismay I thought, Oh Ben, I never really knew you. And now he's tied for the lead with Trump in Iowa. What?!

John Kasich—He said some things in the first GOP debate that surprised me, in that he's a Republican who seems to think it's our collective responsibility to take care of the poor, and while he doesn't personally agree with marriage equality, it's the law of the land, and he respects that, and if his daughter were to come home tomorrow and tell him she was gay, he would love her the same as ever, what parent wouldn't? Pretty revolutionary stuff coming from the right.

As for the rest of the GOP field, Marco Rubio, Carly Fiorina, Ted Cruz, Rand Paul, Scott Walker, Mike Huckabee, Bobby Jindal, and the whole 32-member carnival of right-wingers angling for the crown, one word: Yawn.

Hilary Clinton—Of everyone in this field right now, I would probably vote for her, but I'm just not excited about it. Why is that?

Bernie Sanders—I know I should be more revved up about him, too. His politics are progressive right down the line and he's not running a scorched earth campaign in which he tries to bury his opponents. He's all about lifting up the poor and securing the middle class and getting billionaires to pay their due. I'm impressed with what I've heard in passing. But so far I haven't been inspired to take a closer look. I'm bored. Maybe it's still too early in the cycle.

Joe Biden—You know, I'm not mad at Uncle Joe. With him, you know exactly what you're getting, and that's not a bad thing. He's a heart-on-his-sleeve resilient sort, by nature cheerful, even though he's certainly had his share of personal tragedies. If he runs, he just might give ole Hilary a run for her money. Stay tuned.

One thing I do know, the excitement I felt going to the polls in the last two presidential elections will not be there this time around. None of these candidates are a patch on this guy, and I'm sure going to  miss him when his term ends. But I hear he might be coming to my neighborhood, possibly taking a faculty position at Columbia. How cool would it be to walk down the street and see the man himself? It could happen. 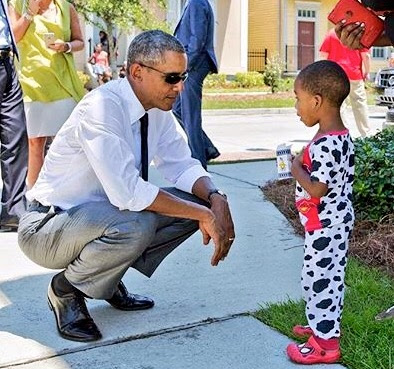 Who's your leading candidate at the moment? Or are you trying to sleep through the noise?