Men of the hour 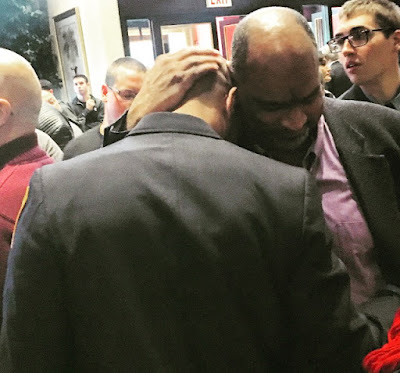 It's been an eventful week, including our son's graduation from the FDNY EMS Academy on Thursday, and my husband's birthday yesterday. In between I had doctor visits and work stuff, and all of it added up to not a single post last week. It was a good week, though. My son's first official day on the job was yesterday. He got the station house he wanted, the one in Chinatown where he'd been assigned during training rotations, where he already knows the other medics. They asked for him. That's my son. He works hard. He's entertaining to have around in a guy's guy kind of way. He rolls up his sleeves and doesn't trip over the small stuff. I'd want him on my team, too. 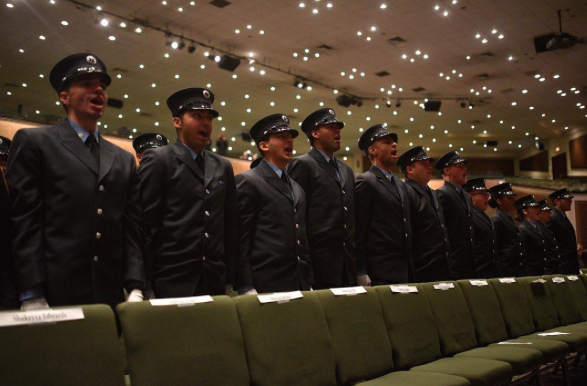 That's a picture of him, fifth from the left, doing the Count on Deck with his graduating class ("Highly motivated, truly dedicated FDNY probies, sir ... oorah! oorah! oorah!"). Later they took the Oath of Geneva, which was adopted in 1948 as a declaration of the medical community's dedication to humanitarian goals, a declaration that was deeply significant in the wake of medical crimes so recently committed by the Nazis. The words of the Oath are quite beautiful, worth setting down here.

I solemnly pledge to consecrate my life to the service of humanity;
I will give to my teachers the respect and gratitude that is their due;
I will practice my profession with conscience and dignity;
The health of my patient will be my first consideration;
I will respect the secrets that are confided in me, even after the patient has died;
I will maintain by all the means in my power, the honor and the noble traditions of the medical profession;
My colleagues will be my sisters and brothers;
I will not permit considerations of age, disease or disability, creed, ethnic origin, gender, nationality, political affiliation, race, sexual orientation, social standing or any other factor to intervene between my duty and my patient;
I will maintain the utmost respect for human life;
I will not use my medical knowledge to violate human rights and civil liberties, even under threat;
I make these promises solemnly, freely and upon my honor.

As the class of EMTs and paramedics recited this oath, my eyes filled up. I looked at my husband and saw him swipe at the corners of his eyes, too. When they were done, the captain said to the group, "You are now among the few people in this world who can say they save lives for a living." That my son has arrived at this place he has pointed himself toward since he was ten years old still fills me with awe. Intention has power.

I didn't get many good pictures from the day. It was raining hard outside, and inside the light threw weird shadows down our faces. But as my daughter said when I lamented the lack of share worthy photos, "You were there. That's what counts." 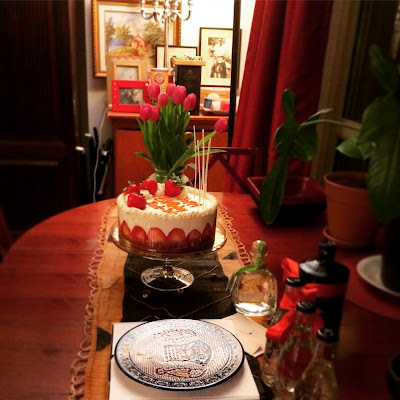 Then on Friday night, we had an easy low-key birthday celebration, just the kids, their loves, and us, for the other man of the hour, my wonderful husband, the man my daughter thanked a week ago for being there. One of her friends was going through some heartache because her father had never been there, and our girl just wanted her dad to know how much she appreciated the fact that that she never had to worry about not having him in her corner. These October-born men named Radford, both the father and the son, they are good and honorable men to have in your corner. Happy birthday my love, my lover, my best friend. I am eternally grateful it's you.