When I was a bohemian

My two are beginning to talk about moving into their own places come the new year. My daughter is salivating at the thought of making her space exactly as she wants it. She has Pinterest boards full of design ideas and color schemes. All of this makes me remember my own first apartment in New York City, a railroad flat on 120th Street with great light, and an endless hallway and two tiny rooms stacked one on top of the other. I moved in there the week before starting my first job as a reporter for Life magazine. It was my first time living alone. The refrigerator was in the living room. The kitchen sink and stove were tucked into a dip in one wall. I put shelves above them to store my few mismatched plates and glasses, and the crystal lemonade pitcher my mother had given me. My cutlery lived in painted cup. Somehow, I made the place bohemian adorable.

I obsess so much about my children's safety, yet I hardly worried about my own when I was their age. The building had long corridors with alcoves in which two doors were tucked at right angles, leading to two small apartments that had previously been one spacious one. I always thought those alcoves offered perfect cover for a person with nefarious intent. But there were no such incidents. The basement laundry room was down a long narrow cobwebby hallway with dusty low hanging water and heating pipes. I only went down there when I had to, sure the place was haunted or else I'd meet some intruder and no one would ever find me. And right next door to me, so close that our front doors almost touched, lived a drug dealer. We said hello cordially as we came and went, and I pretended not to notice his clientele banging on his door at all hours of the day and night. I never told my mother.

That apartment was where my husband and I lived when we were first married, until we moved to a larger place. If the walls of that little railroad flat could talk, I'd ask them to be quiet and keep my secrets. So much happened in those rooms. There were years I was so lonely and desperate there, and yet here I am, still standing. And this is what I want to tell my children: Gather all of life in your arms, cherish the joys and don't be afraid of the hard passages, because you will come out the other side. That's what we do. We survive. 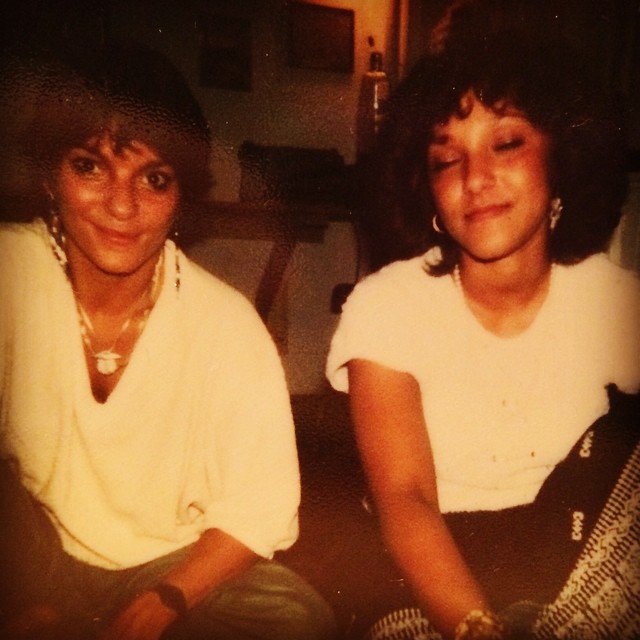 That's me with a dear friend in my first apartment. We were footloose reporters in our twenties, traveling for weeks at a time. And when we were in town, we worked till all hours and then stayed up even later in each other's homes. Oh, the stories we could tell.