"To be black in America is to never be able to have your presence be benign, and to always be in danger, of unease, humiliation or even arrest—or death by arrest—because of it." —Joy Reid

So I'm going to have to write about what happened in Starbucks, even though I don't want to. Even though I am exhausted by the accumulation of such incidents, and have been tweeting about the latest one all weekend. When I first saw that two black men who were doing nothing more than waiting for a friend in a Philadelphia Starbucks had been arrested, it was 2 in the morning. Unable to sleep, I was scrolling through Twitter in the dark. I happened upon a video of the two men being perp-walked out of Starbucks in handcuffs on Saturday afternoon by eight cops, all because the shift manager was uncomfortable with the men's black bodies in her space. One of the men asked to use the bathroom and was refused the code, ostensibly because he hadn't purchased anything. Yet moments later a white woman walked in and asked to use the bathroom and was given the code. She hadn't purchased anything either. Meanwhile, the two men, both realtors, sat talking quietly, minding their own business. Then cops swarmed the place. The thing that blew my mind? The men had been inside the shop for only two minutes when the shift manager called the police. 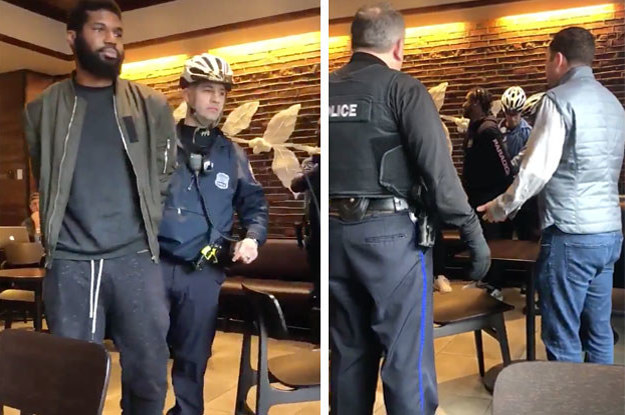 The video of their arrest, posted by Melissa DePino, a white patron who refused to witness injustice and do nothing, had only a few hundred views and retweets when I first saw it. I was so outraged for the two men, and to be honest, hurt for them, too, that I started furiously retweeting the video and tweeting about the incident. I wanted to do my part to help it go viral. DePino, who saw the whole thing, was frustrated that her white friends kept asking her, "Are you sure they didn't do anything? There must have been something you didn't see." But no, there were just sitting there, waiting for their friend, also a realtor, a white man who showed up as the two black men were being led out of the shop in handcuffs. The shift manager said they were trespassing. DePino was even more perplexed by the friend who commented, "I didn't know this still happened in America in 2018."

Amid calls to #BoycottStarbucks, the CEO of the coffee chain apologized anemically, and then more robustly as Sunday wore on. To my mind, his statement was marred by his effort to excuse the shift manager, saying she did not intend for the men to be arrested. What the holy hell, Starbucks? Just about every black person and a whole lot of white people in America to know that when you call the cops on two black men who are not bothering anyone, you are putting their lives in jeopardy. This is not hyperbole: The men could have ended up dead. So please, people, police your imaginations. Just because a man is black does not mean he is about to rob you or do you harm.

The men were held for nine hours and then released with no charges. They have both retained attorneys. I hope they sue royally. The part that hurt me most as I watched the video was their absolute calm and resignation as they were handcuffed for doing nothing more than sitting while black. They knew that if they offered the slightest resistance, they might not survive the encounter. Some days, I am comforted that my family lives in New York City, a melting pot of humanity, which I tell myself should serve to keep my children relatively safe. And then something like this happens in Philadelphia, another melting pot of humanity, the place where the nation's laws were first encoded, although, one cannot forget that the U.S. Constitution at first legislated black bodies as "three-fifths of all other persons," not even a whole human in the eyes of the law.

Two hundred and thirty years later, not enough has changed. 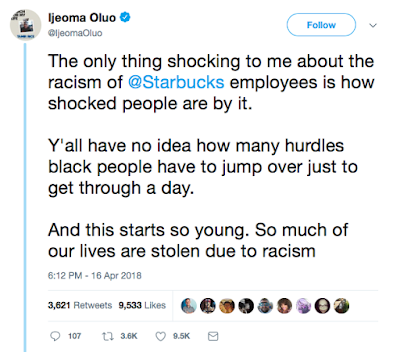