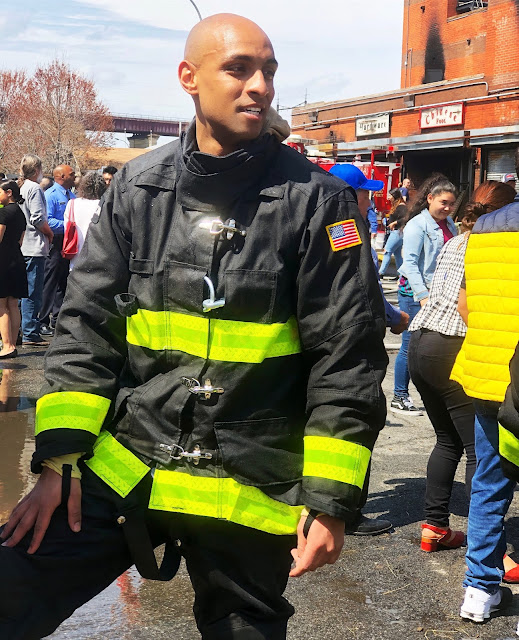 We spent the day yesterday watching my son and his squad perform rescue operations. He was so impressive. Last week he took his final exams and completed the Fire Academy boot camp training—18 weeks of hell. He graduates this Thursday and then my boy will be a full fledged firefighter in New York City, where the FDNY gets five thousand calls daily, more than Chicago, Philly and Los Angeles combined. At certain moments during yesterday's demonstrations, my heart was in my throat, especially when the men and women in uniform would swing from the ladder onto the roof of a seven story building, or rappel down the side of a five story building on a plain nylon rope. Other times were pure fun, like when the probie firefighters did the firehose demonstration, and tuned the spray on each other. After, some had their loved ones experience what it's like to manage the firehose, or be rescued from a high window. 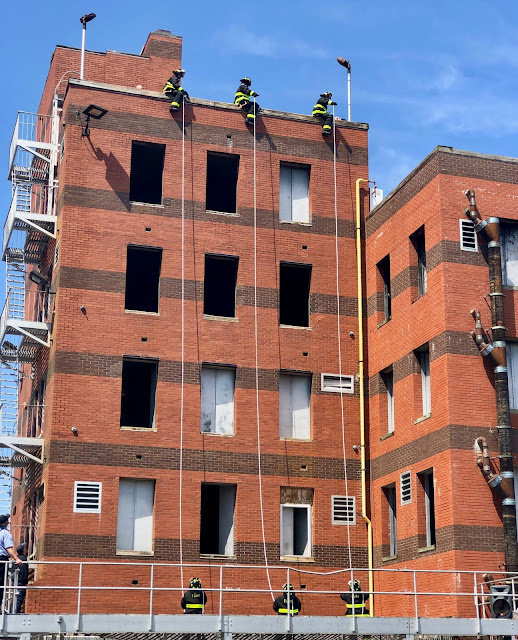 That's our boy in the middle at the top of the building, about to rappel down the side. 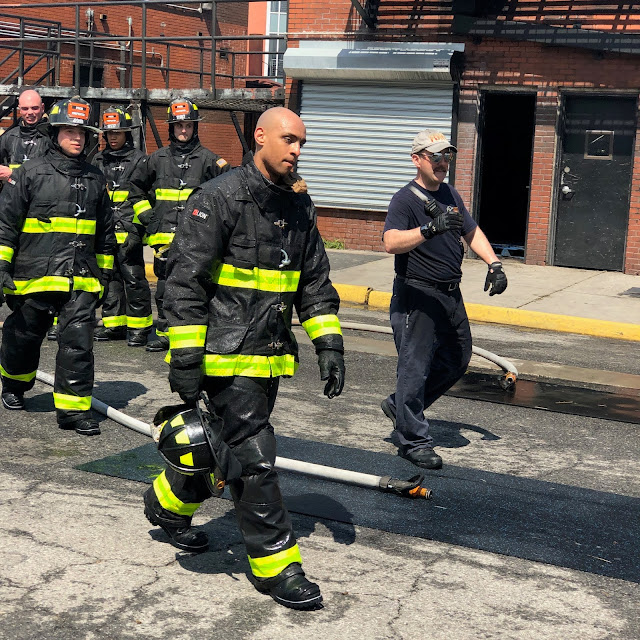 And there he is, soaking wet at the end of the firehouse exercise. The spray of water must have been a relief in that boiling hot gear. 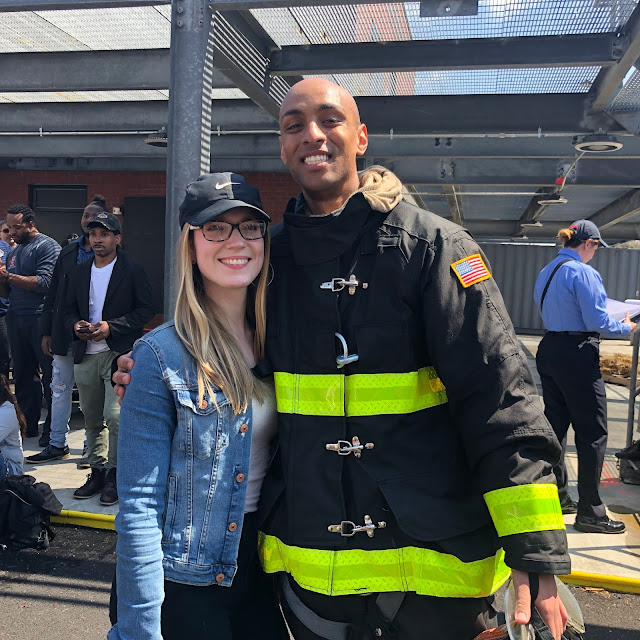 We were all so proud. I think he was proud of himself, too. 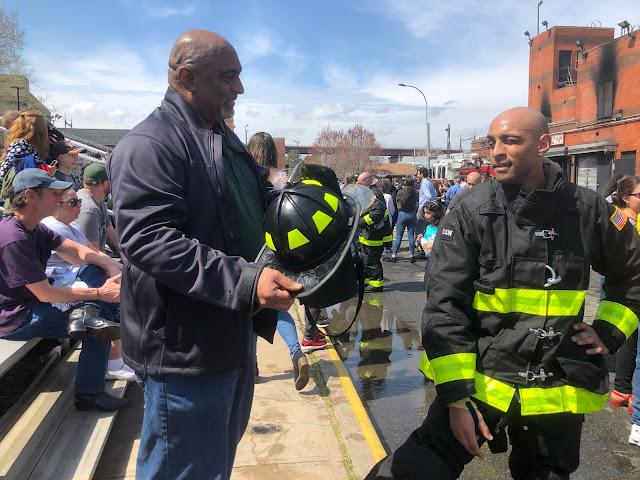 His dad wanted to know details about the helmet. 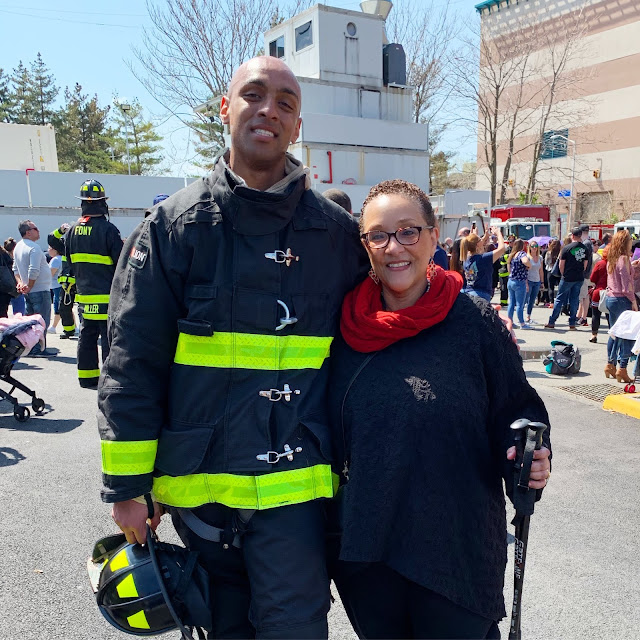 There was a lot of walking so I brought my nordic poles. 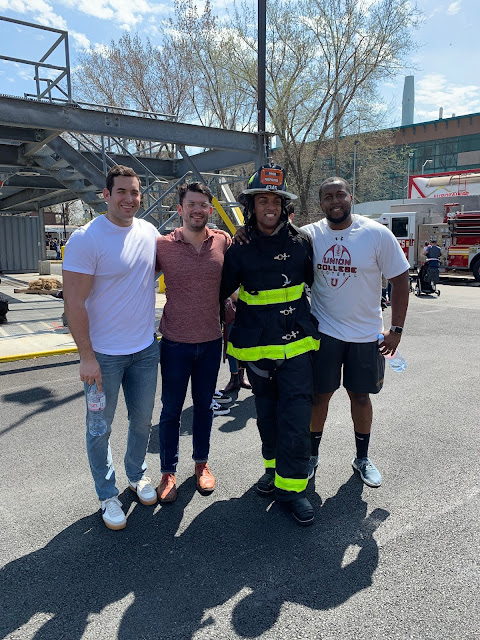 His buddies from college were there. They were all in a state of wonder that he'd followed through on what he used to talk about doing. "A lot of people dream of becoming a firefighter," one said, "but he actually did it." 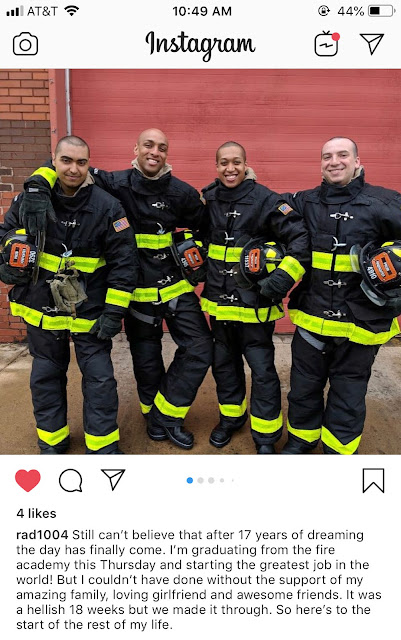 He thanked us yesterday, too, when we were back at his house. "I couldn't have done it without you," he said. "At every step you were there, believing in me." I don't have the words to describe how full my heart was. It was a moment. His dad felt it, too. We have watched our son take each determined step to fulfill a dream that tapped his heart when he was ten years old. It's not so easy for a kid with no legacy in the department. Unless you come from generations of firefighters, there are a lot of roadblocks you have to find your way around. As they say in the department, it's the best job in the world and they don't make it easy to get. But  at every stage our boy found the right next door and did the hard work to make it through. And now he is one of those who people will call in their worst moments. And he's ready. He is brave and his heart is true. May he be protected always.