Thanksgiving is around the corner, and the kids, by which I mean the two I birthed and assorted nieces, were pressed. Our microwave hasn't worked predictably for over going on two years. Sometimes it warms the food, and sometimes it doesn't, with no discernible pattern. The man and I made do. We'd received our first microwave as a wedding gift from my Uncle Charlie, along with a can opener—a broad joke that if my husband hoped to be fed then we'd better have a microwave so I could warm up canned soup. We laughed along with my uncle, who wasn't a chauvinist but had been raised in an era when women cooked for their men. He didn't know that in our home, the chief cook would be my husband, so much so that my children grew up thinking that in families, men were the traditional preparers of food.

As my man typically prepares food using the stove and oven, we limped along with the finicky microwave. But after Thanksgiving last year, the warming up of leftovers proved a challenge. Sorely overworked, the microwave simply quit for hours at a time, frustrating everyone. In the week after, it began working again, often enough for us anyway. Again, the man and I went along. There's a vague plan to renovate out kitchen at some undefined point in the future, so I think we both figured  we'd get a new microwave then. All of that is background.

A couple weeks ago, my daughter texted me: "You have to get a new microwave for Thanksgiving this year. We want to melt marshmallows." I think I texted back a thumbs up and promptly forgot about it. Then on Sunday, our niece Dani, who's been living with us since she graduated college last summer, came into the living room, plopped down in a chair, and said, "I'd like to read to you from our group text." "Who's in the group?" my man asked. The group included her and our daughter in New York City and three of our nieces who are Thanksgiving regulars: Leisa in Dallas; Leah, who lives in Jamaica but now attends college in St. Paul, Minneapolis; and Dani's sister Alexis in Orlando. "Okay!" my husband said. "We're listening." It went thus: 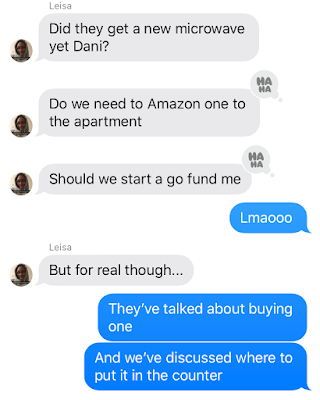 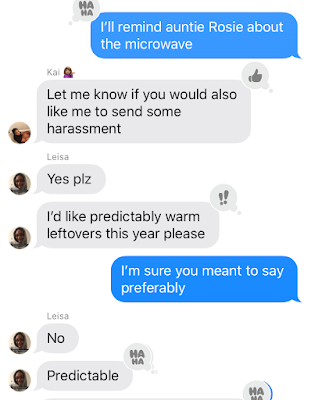 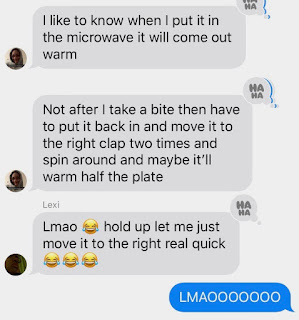 Everyone was crying we were laughing so hard. My husband went out to the big box appliance store and bought a microwave that very afternoon. Dani went with him, and took a video of him paying for the new microwave and sent it to the group. The GIFs that poured in were hilarious. I wont share them here but trust me, laughs ricocheted from New York to Dallas to Orlando to St. Paul. A new round of hilarity ensued when the man took a picture of the shiny new appliance installed on our counter and texted it to the group. 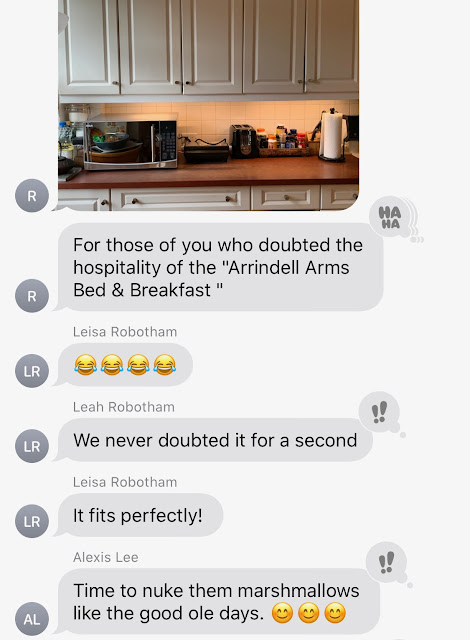 Turns out the melted marshmallow tradition is a powerful incentive for mob activation, which in this case yielded an immediate desired result.