The season of gold 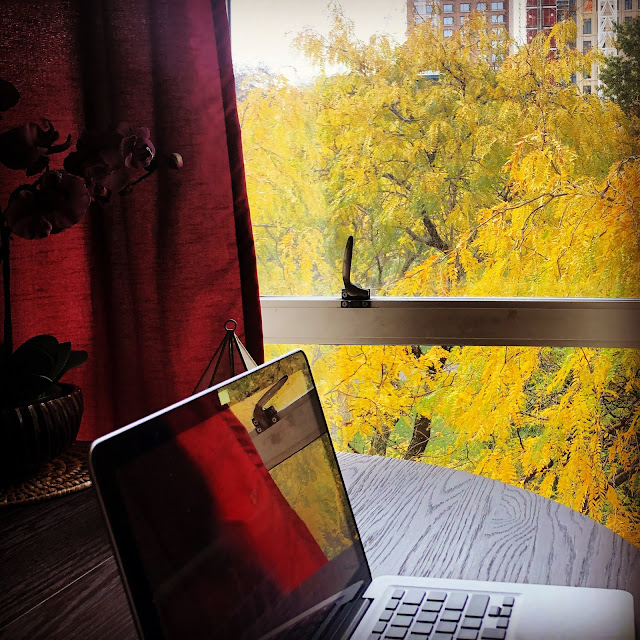 The publishing contract for the book I'm collaborating on was signed yesterday, and now it's official. In theory, I'm not supposed to start writing until my first payment is received, but my subject is the soul of integrity, so I have been writing ever since our kickoff meeting at the end of September. It's hard finding my way in. I have to somehow break open the chapter summaries I crafted for the proposal, set most of it aside, and rethink each chapter more spaciously. In the entire month of October, I managed a single chapter, the second one, since chapter one was already written for the proposal. I drafted the introduction as well, though I'm not sure it will survive in its current form, but for now it's there, holding space. Chapter two was hard to figure out, as my subject's memory from that period is sketchy, and secondary sources are only partially accurate. But now, I have 5,524 words of a chapter, and in editing what I'd written yesterday, I happened upon the perfect sentence to open it, a sentence that was originally halfway down the first page, and when I got to it, it shimmered and said choose me.  I love when that alchemy happens. I'm still editing, as the chapter is pretty rough yet, but I will start on the third chapter next week. I'll begin by doing a fresh interview with my subject to get new stories for it, or new takes on old stories, and I've already made a list of areas to pursue that will take me beyond the lockjaw of the three page summary in the proposal. Writing is hard, y'all. I'm not yet at the stage of hearing celestial choruses because I love the work I do. In fact, right now I think I just imagined that there ever comes such a stage.

It's been a rather special couple of weeks in my family, and I have a raft of pictures I've not yet shared. Here are some. 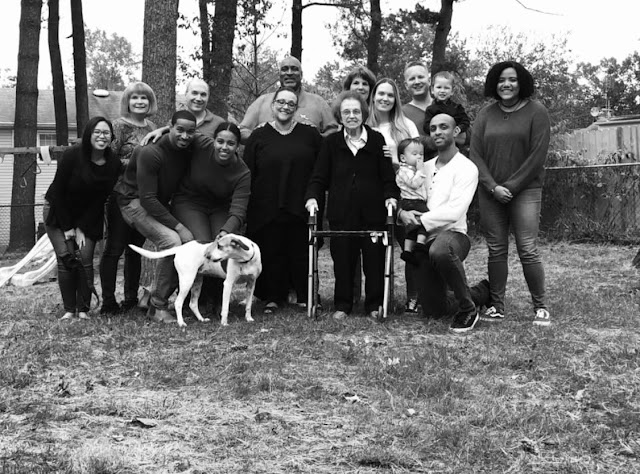 Last Saturday, our two families celebrated our children's engagement to be married. There was so much laughter and shared joy. My son's fiancée has felt like a daughter to me right from the beginning, so I couldn't be happier that she and my son will be making it official. 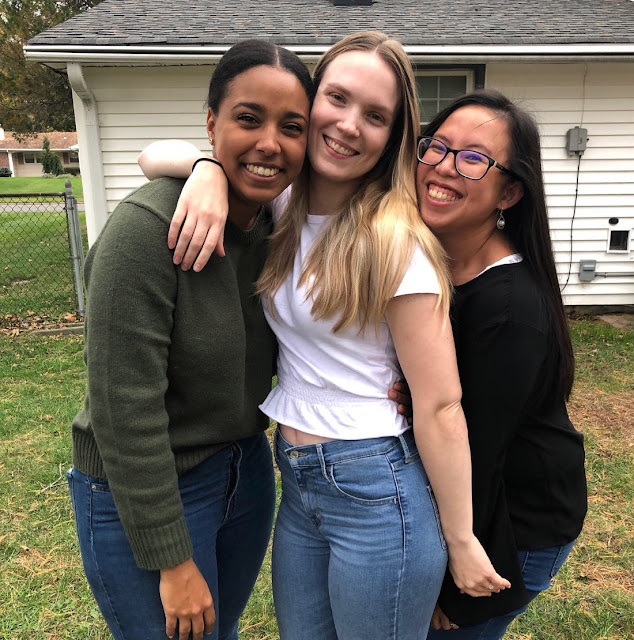 Here's my son's lovely fiancée with her sister-in-law (her brother's wife) on the right and her sister-in-law to be (my daughter) on her left. One of the realities of young people hitching their lives together is the linking of families. When it's congenial, it's a gift indeed. 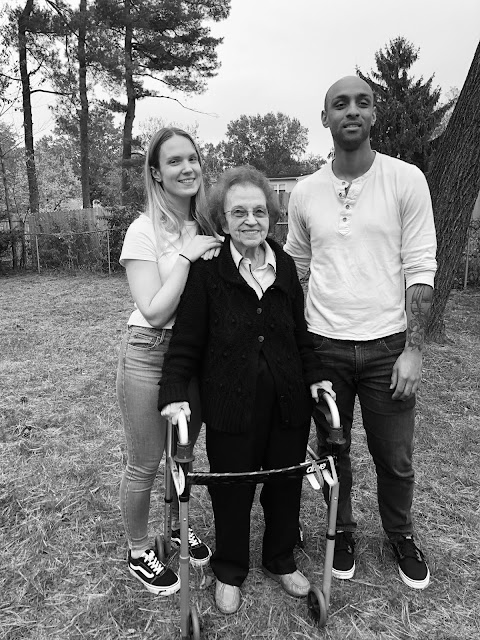 The newly engaged couple posed with her grandmother, who I'm told adores my son. 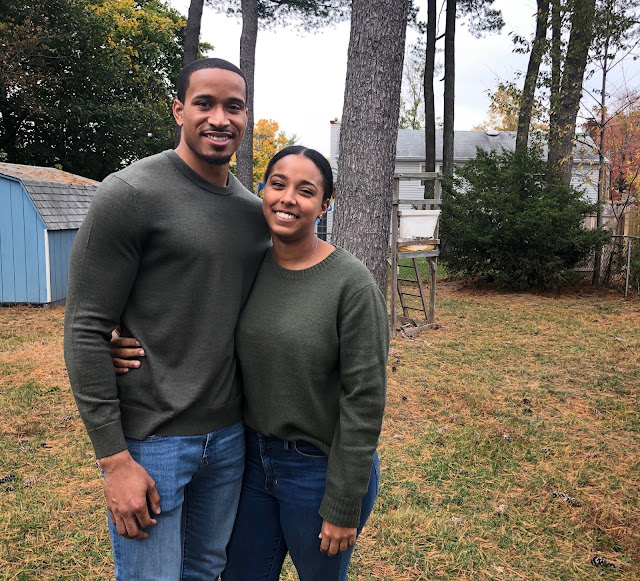 These two got teased all day with suggestions that they would be "next up to bat." 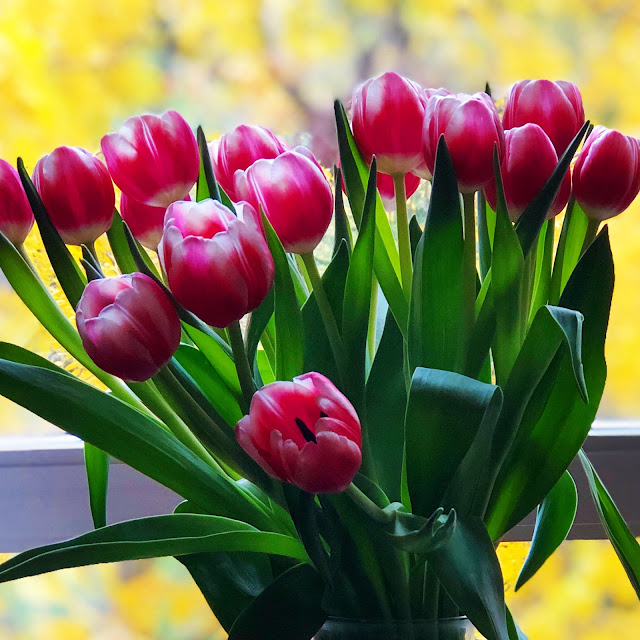 I brought home tulips for the man on his birthday. 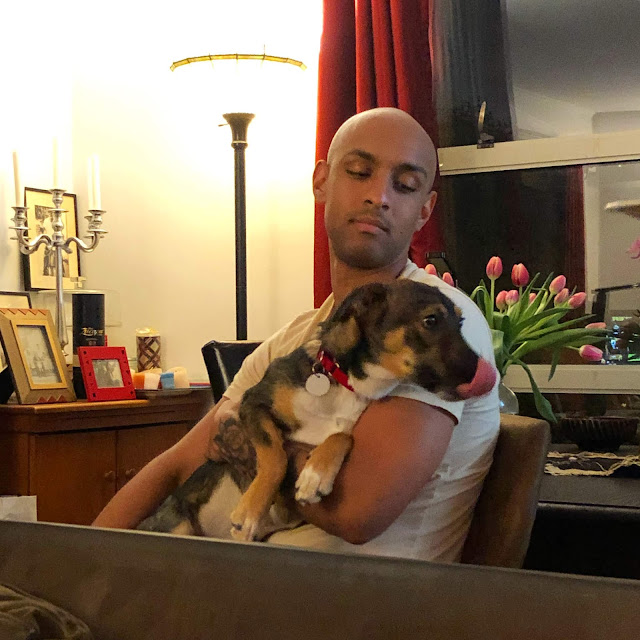 My daughter and her boyfriend are fostering a hyperactive six-month-old pup named Sarah. We all fell in love with her, especially my niece and my son. 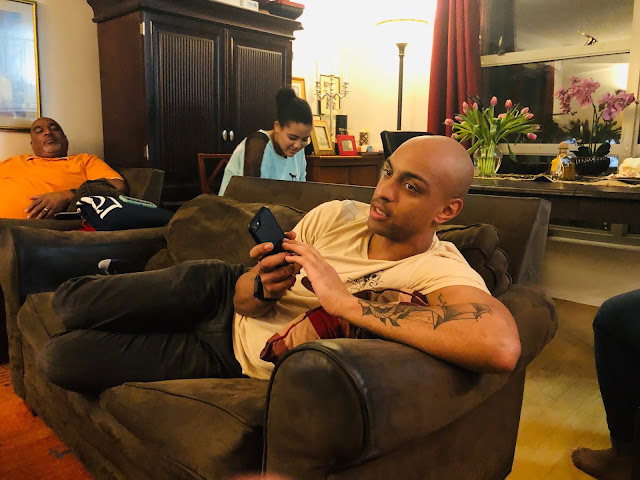 We are a family that tells stories, especially the men named Radford. 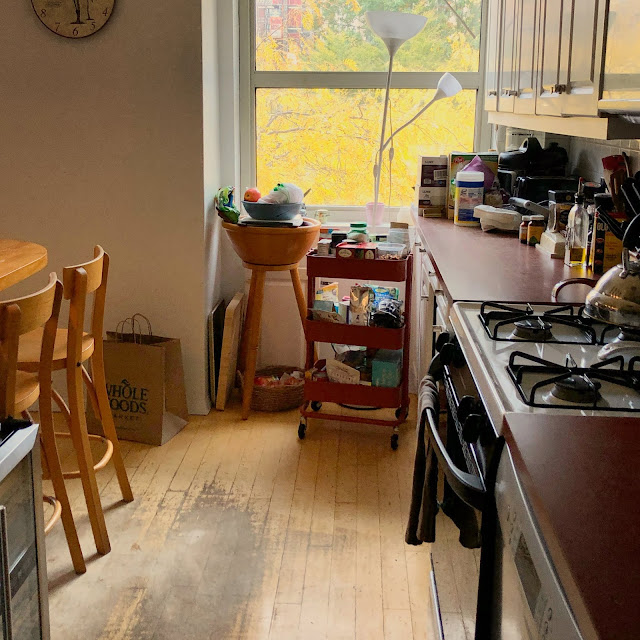 Definitely not an HGTV kitchen, but there was something about the light. Heck, I was even feeling some affection for the well-trod look of the scuffed floor. 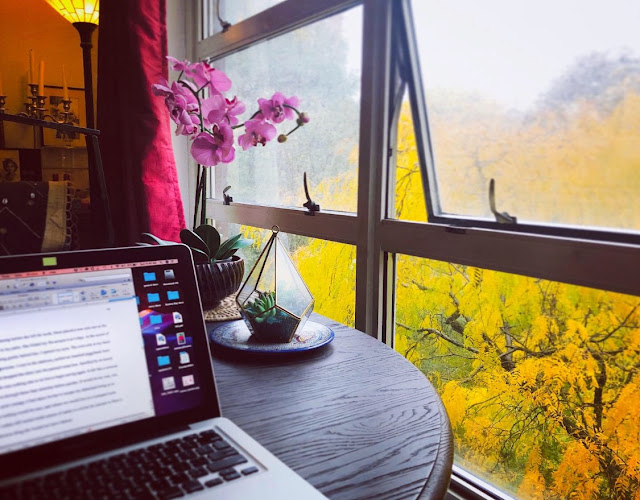 And now back to work. No such thing as weekends when you work for yourself. I love writing at the dining table when the trees are so boastfully spilling their light. In a week those branches will be bare. I'm relishing nature's extravagance while I can.
Posted by 37paddington at 2:06 PM