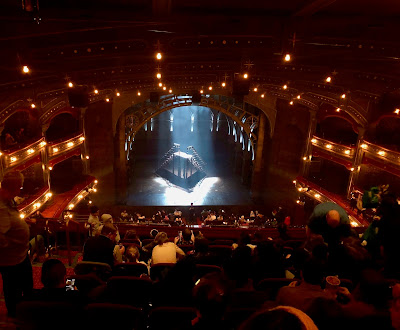 On Thursday and Friday evenings, my girl and I attended the two-night performance of Harry Potter and the Cursed Child. For Part 1 on Thursday evening, we were uncomfortably full from dinner at The Lambs Club, a rather fancy establishment run by chef Geoffrey Zakarian, located a block from the play. The food was delicious but far too rich to be followed by an evening at the theater. That heavy feeling affected our experience of the first night, I think. The performance was entertaining, but in an intellectual rather than an emotionally engaging way. The scene shifts were happening too fast, and felt confusing. We were in the very last row of the rear mezzanine, which was what my girl could afford for my Christmas present. "We'll be in the room where it happens," she had warned me, "but in shitty seats." In fact, our seats were perfect. Having our backs to the rear mezz wall was actually very cozy, especially since our seats were on the center aisle at the end of the row, so no claustrophobia. It helps that there are no bad sight lines in the Lyric Theater.

Part 2 on Friday night was more enjoyable. For dinner beforehand, we went back to Seamore's, the fish place my daughter loves, and knew to eat lightly. We also wore comfy clothes, sneakers and soft fabrics, forgoing any notion of dressing up for a night at the theater. Everyone else seemed to have the same idea. We were a far less spiffy crew than on the first night. An unexpected bonus: It was pleasant the way theater-goers in surrounding seats greeted us and each another, as if having shared the evening before, we were now bonded.

The action on night two was also far easier to follow, I supposed because the contextual groundwork had already been laid, and character and story could take center stage. We loved it. The sets were fantastic on both nights, the scene changes magical, and the story of the sons of arch rivals Harry Potter and Draco Malfoy, poignant. The boys become best friends, both of them outsiders bullied by their Hogwarts peers and overshadowed by their powerful fathers. They nevertheless find the courage to travel back in time and save the world. My daughter judged the live performance better than the book, a screenplay on which J.K. Rowling consulted, but did not write. I would love to see this story in novel form, by her hand. It would also make for an engrossing movie.

Can I just say how much I cherish this tradition my girl and I have started, of giving each other theater tickets for Christmas. It's a superb opportunity to spend a charmed evening or two in the deep-freeze of January, basking in my daughter's fine company.