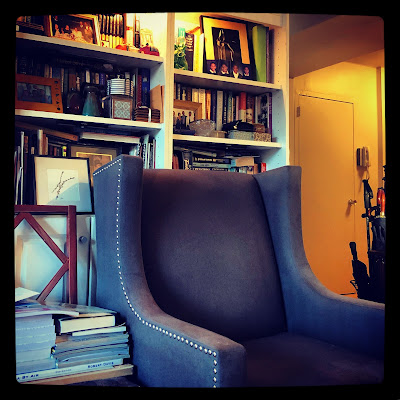 For a some lucky people, the new corona virus has offered us a time out, a chance to reflect on what truly matters, and a gentle window of unstructured time with people we love. I am one of the fortunate ones, for sure. I am in a house with very congenial company, three people who don't bother each other very much, and whose paychecks are so far continuing. We disperse to different rooms of the house—we have a house that allows that—and we gather together at different points in the day, at lunch time, over dinner, occasionally to watch the news or a movie on TV.

We have all we need, as well as much that we want, an embarrassment of blessings compared to many. So what if my decade-old couches are more battered than ever from continuous use, with actual tears in the fabric now, and the cheap plywood frame giving way beneath. It is a trifle. My family remains healthy, including my son whom we have not seen in six weeks because he is on the front lines of the pandemic, and refuses to put us at risk. I sent him the usual text last night. "How are you doing, son?" He sent me back the usual reply. "Fine. Usual."

Also, my niece is in her room playing her cello again. She just finished a lively rendition of Hozier's "Take Me to Church" and has now launched into silk-smooth chords of "Somewhere Over the Rainbow." If cello music wafting through my house doesn't describe a gentle quarantine, I'm not sure what does.


The story is a whole lot different for a swath of other folk, including some we don't often think about when we're giving out credit to nurses, doctors, first responders, food workers, teachers, bus drivers, and cleaning crews. We forget the gig workers in crowded warehouses fulfilling orders that aren't truly essential for people in gentle quarantine with the means to indulge their whims. Meanwhile, the titans of industry have made literally hundreds of billions since the pandemic began, while Trump's red-state henchmen in Congress bicker about giving stimulus checks that wont even cover a month of expenses to people who are risking their lives for our comfort.

And let's not forget the president of these disunited states advising people to drink disinfectant to clean their lungs on national TV, we all heard him do it, like a child so absolutely taken with his brilliant idea, convinced he's solved the whole thing when medical experts couldn't, what a fucking idiot. And now they're trotting out stories to smear Joe Biden, and putting me in the unenviable position of saying I don't know if he did that thing or not, but I'm voting for him anyway, because I'd vote for a cabbage instead of the malevolent idiot currently in the White House, who just might be the worst and most howlingly empty human on earth. He's most definitely in contention.

I will turn my manuscript in to my subject and her agent in one week. And then I plan to binge watch something good or at least absorbing while they read and figure out their changes. My daughter suggested Little Fires Everywhere and Schitt's Creek. My son suggested The Outsider, based on a novel by Steven King. I also have the new seasons of Killing Eve, Homeland and Ozark to watch, although I already tried Ozark and turned it off. The violence was too unsettling for me in these strange times. I don't mind violence, usually, but this felt somehow gratuitous. In any case, I'd love to get drawn in by something new. Recommendations, anyone?