Our son just called. The Fire Department asked for volunteers for antibody testing, so he went and had his blood drawn, and will have the results in a few days. New York is doing a big push on antibody testing, to see just how deep into the population covid has spread, though of course, there are all sorts of qualifiers and uncertainties with the results, like if my son tests positive for antibodies, does it mean he had it and has recovered, or that he has it now, but is exhibiting no symptoms. He has definitely been exposed at the firehouse, working alongside firefighters who later tested positive, not to mention all the unknown encounters on medical calls in the field. I'm thankful he feels healthy, and pray he stays that way. He joked with us on the phone just now, as we kept him company on his drive home from work, that he would be climbing the walls if he'd had to be in quarantine for six weeks already and that he's actually glad he has a job that requires him to get out there and be active every day. He has no fear, really. He just gets it done. That's our boy in the photo, not yet two years old, kissing the sky when his dad threw him into the air from the ocean. I love that you can tell he isn't worried about falling. He knew his dad would catch him. 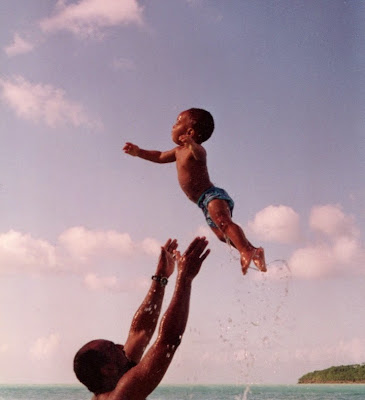