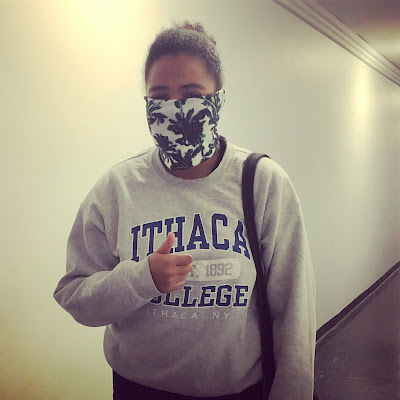 After two weeks inside, my husband and my niece ventured out the the supermarket yesterday, wearing homemade face coverings and plastic gloves. This morning, my niece shared how you can make a no-sew face mask with a bandana and two hair ties. There is now some debate, however, about whether these homemade masks serve any purpose at all. At least it helps us keep hands away from our faces.

An ER nurse on my TV screen was telling a reporter that when family members or friends bring desperately ill loved ones to the hospital, knowing they won't be allowed past the door with the patient, there is a moment before they take their leave of each other when they exchange a particular look, wondering if they will ever see each other again. It is this look, the nurse said, that guts her.

In state after state, governors are seeing their orders for ventilators and other medical equipment evaporate as higher bidders swoop in. Often, that bidder is the federal government, which then warehouses the purloined supplies, never distributing them to states in desperate need. In fact, yesterday the president's son-in-law said that the federal medical stockpile isn't for our use. "The notion of the federal stockpile was it's supposed to be our stockpile,” he said. “It's not supposed to be states stockpile that they then use." Who, I wonder, is the "our" in this statement? Last night, the hashtag #KushnerIsAnIdiot was trending on Twitter.

Every evening at 7:00 in our city, you can hear the sounds of applause and cheers and air horns out the windows of apartment buildings, as quarantined people send their thanks to the first responders who are changing shifts. These heroes are risking their lives to save ours.

My friend’s housemate, an ER doctor at Weill Cornell, came down with symptoms. She moved into another friend’s empty Airbnb to wait out the illness. She told my friend that if she gets sick to go to her hospital, so she can possibly assist her care. She also told her that if she ends up at a different hospital, she’s not to let the hospital staff start an IV for fluids on her, as the medical staff at Weill Cornell has been finding it worsens the fluid in the lungs. She noted that their hospital has had one covid death while a hospital five blocks away has had 63. She was making the point that the day to day learning isn’t necessarily being communicated widely enough. I have no science to back up this IV fluids claim. I’m just sharing this here in case you ever need to ask the question.

There is also some suggestion that ibuprofen (Advil) should not be taken with covid, as it appears to interact with ACE inhibitors in a way that worsens symptoms. This has not been definitively proven, but to bring down fevers, probably safer to take acetaminophen (Tylenol) instead.

In truth, though I worry non-stop about my son, my little household is having a gentle quarantine experience compared to some. I'm grateful, and may it continue to be so. America seems to be having a worse time with the new corona virus than other hard hit countries, though, and this is completely the result of a staggering failure of leadership on the part of the federal government. Why hasn’t the president invoked the Defense Production Act in this crisis? He’s reportedly invoked it hundreds of times for capitalist pursuits so why not to save the lives of the American people?

Also, I finished a complete draft of my book yesterday, 92,730 words. Now I begin again with the editing. Meanwhile, my husband is making progress with his sailing ship. I love the red glitter hearts around his head in the picture. Which is to say, I love him. 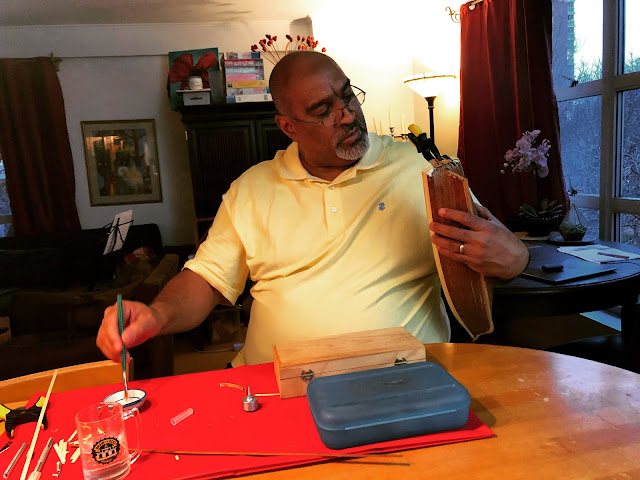