Don't give up the fight

Are you watching the impeachment trial? My God, yesterday was powerful. The insurrection on January 6 was intended to be so much worse, as rioters targeted Pence and Pelosi for assassination, and looked to take hostages. At Trump's behest, they came armed with guns, zip ties, handcuffs, napalm, and pipe bombs, and with blood lust like a fever in them. The Captiol police saved so many lives that day, at great cost to themselves.

I'm not naive enough to think that the Republicans will convict the former president, though he is guilty as sin. But as Hilary Clinton pointed out, "If Senate Republicans fail to convict Donald Trump, it won't be because the facts were with him or his lawyers mounted a competent defense. It will be because the jury includes his co-conspirators." And indeed, in Republican-led state legislatures across the country, laws are being passed to continue stealing people's votes. Arizona, for example, has proposed legislation that will allow state legislators to void the results of any presidential election and install whomever state electors choose instead. I really hope Congress is able to enact voting rights protections soon, because American democracy is on life support.

Listening to the impeachment managers meticulously present their case yesterday, two recent reflections from Congresspeople struck me anew: Rep. Ayanna Pressley of Massachusetts saying she will never forget the sight of Black custodians the day after, bending to clean up glass and debris and excrement in a Capitol building ransacked and desecrated by white supremacists. And Rep. Dean Phillips of Minnesota recalled how, as the mob broke the glass of the House chamber, he yelled for his Democratic colleagues to follow him to the Republican side of the room, so that they might save themselves by blending in with their red-state colleagues. In that moment he realized, with the force of a gut punch, that this option wasn't available to his colleagues of color. "I've never understood, really understood, what white privilege really means," he told his fellow House members later. "It took a violent mob of insurrectionists and a lightning-bolt moment in this very room."

I don't really care that the Republicans won't convict. Or rather, I do care, but I'm resigned. The entire record of that day, January 6, 2021, and the weeks, months, and years of lies and incitement to violence that preceded it, will be set down in the historical record, with all the dots painstakingly connected, forever. I do hope our country wakes up enough over the next two years to vote each and every one of those Republican cowards out of office. We shall see.

Here's a "fight for street art" mural Warhol and Basquiat by Brazilian artist Eduardo Kobra. It's on the same street in Brooklyn that my niece just moved to. I told her now she's a proper Gen Z Hipster, living down the street from true pop art icons, to which she replied, "Then I better wear my red Doc Martens more." 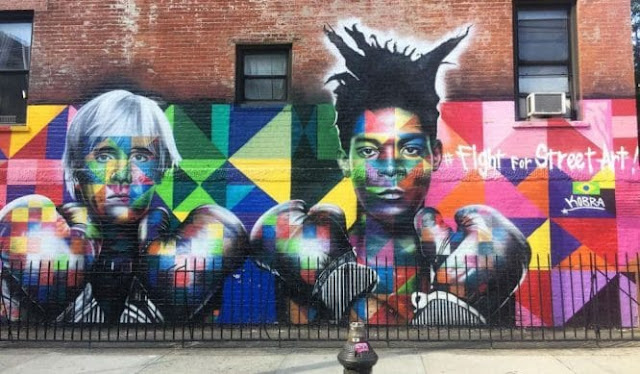