I am in such an anxious place. As my daughter moaned when she signed the contract two nights ago for the new job she was offered on her birthday, "Change is hard, Mama." I can tell you now that she's changing jobs. She told her boss yesterday, the two of them cried. She loves her current boss, but just felt that in order to grow she needed to take on a new challenge. She's been working at that nonprofit since she graduated college in 2016, and they promoted her three times, so as her mother, I felt she was safe and appreciated there. But safe is overrated when it comes to growth, so I applaud her stepping into the unknown.

Meanwhile the demo on the kitchen begins tomorrow, and we are not yet done packing up everything. I am once again gobsmacked by how much stuff we accumulate in our lives. We use perhaps five percent of what is in our kitchen, so why do we have all those things. I’m drowning in material possessions. It sucks up all our air. Also, the man and I aren't as young as we used to be, we don't power through physical tasks as we once did, which means I'm feeling extremely overwhelmed. And anxious. And lonely. Why lonely? Decision fatigue is real. Self-doubt is real. Relinquishing control and daring to trust an outcome that is in the hands of others to execute when you’re not that clear on your own vision is hard. At least it is for me.

My son just came. He immediately got busy throwing out a lot of expired containers, with not a moment of doubt or angst. Thank you for that, son. I don’t even care what went in the discard box. You are a prince. 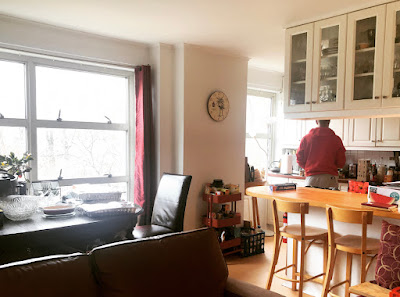