For his birthday on Friday, my girl made her dad the richest salted caramel chocolate cake I have ever tasted, and we gave him the documentary, Fire in Bablylon, about the West Indies cricket team that dominated world cricket for 15 years in the eighties and nineties. My husband loves this film, which he sees as a story of overcoming, of unifying, of victory in the face of all odds. There was something about settling down to watch this film with him, listening to the cadence of Caribbean voices, West Indians' lyrical and always delightfully surprising way of expressing things, the cricketers pride and ability to persevere, to come back from humiliating defeat and to plan and work for the triumph, and then to sustain it for 15 years.

My husband's eyes glittered with fervor as he explained to our daughter and me that no other team in any other sport in the world had ever remained unbeaten and at the pinnacle of their sport for 15 years. He talked about the way that team united all the islands of the Caribbean in a way politics and culture had never been able to do, and about their overcoming the British colonial sense that cricket was a White man's sport, and that West Indians were not supposed to win, they were merely supposed to entertain, and how their story was the Caribbean people's Eyes on the Prize. Later, my daughter said to me, "I wish I could tape Daddy sometimes when he speaks. He is so passionate about his history." I was touched by her recognition and appreciation of who her dad is.

We also did a session on Face Time with our son, who had received his new iPhone 4S in the mail that afternoon, that was his birthday present. He told us how he was planning to impersonate the world-record holding sprinter Usain Bolt for Halloween. He has a track jersey with Bolt's name that he got for Christmas a couple years ago, and he has a huge Jamaican flag hanging on his wall (along with an Antigua flag and an Arsenal Soccer flag), so his plan was to wear the jersey, drape the flag over his shoulders and do the famous lightening pose that Bolt affects after smashing yet another record. I can just imagine my boy goofing around and enjoying himself and maybe also talking a little trash about the speed and dominance of the Jamaican sprinters.

Outside it was raining and inside it was a sweet, cozy family night. I asked my husband to show me his favorite photos of him with his children. These are the photos he chose. 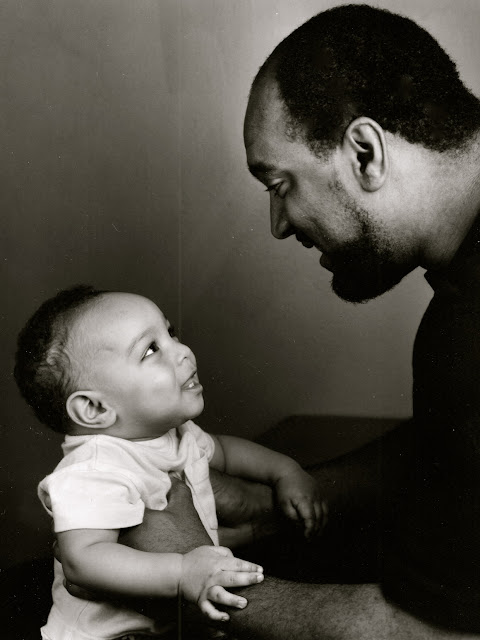 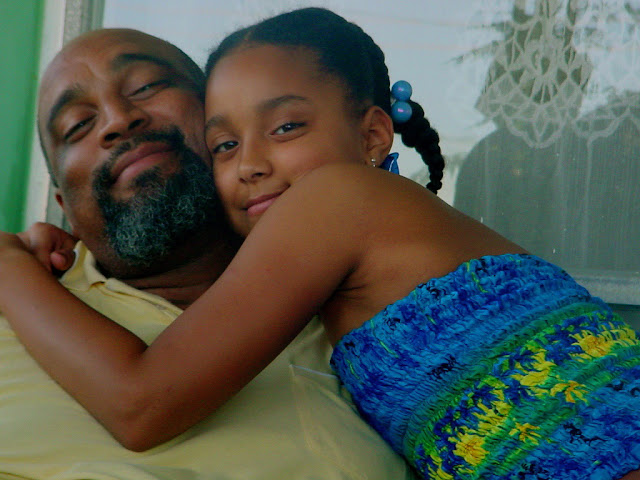 The top photo was taken by our friend, the photographer Ozier Muhammad, and it ran in New York Newsday as part of a father's day photo essay. Our son was not yet a year old. The second photo I took on Christmas Day in Antigua on the gallery of the house in which my husband grew up and in which his parents still lived. Our daughter was 9 years old.
Posted by 37paddington at 12:32 PM