My brother lives in a three story house and my mom is fairly marooned upstairs unless someone helps her down to the living room, or further to the dining room, or goes walking with her down to the gate, after which she is exhausted. But my brother brought the big puffy green leather recliner from the basement up two flights to my mom's room and this morning when I spoke to her she was happily reclined, a view of the blue and purple hills out the window to her right, the television straight ahead, a little table to her left on which she rests the tray brought up with her meals, and under the window the driveway so she can hear everyone coming and going, and a set of keys in her hand that can she drop down out the window to a visitor if she is alone in the house, which she seldom is.

Across the room is her bed where her two youngest grandchildren, 11 and 8, sprawl and play on her iPad, which is not to leave the room, and my mother navigates her rollator around a bench to get to the bathroom, knowing it's the one thing that makes everything a little crowded, but she wants to keep that bench because that's where the manicurist sits when she comes to do her nails, and company also sits there, but she has to give it a little shove out the way when she wants to go to the bathroom, because it overlaps the doorway just a little bit. She doesn't mind.

She's very comfortable now that the big green recliner is there, and she can lean back in it and read her Bible and her prayer books and play bridge on her iPad and watch her shows and close her eyes and dream. Mostly she dreams about my father. I want to hug my brother for making a good place in his house for her because the truth is, that is where she lives now. She still has the house in St. Lucia but she will never go back there unless we are with her, and that's how it is when you're on the verge of ninety and every week you get news of another friend gone, but she sounded so good when we talked for two hours on the phone this morning. 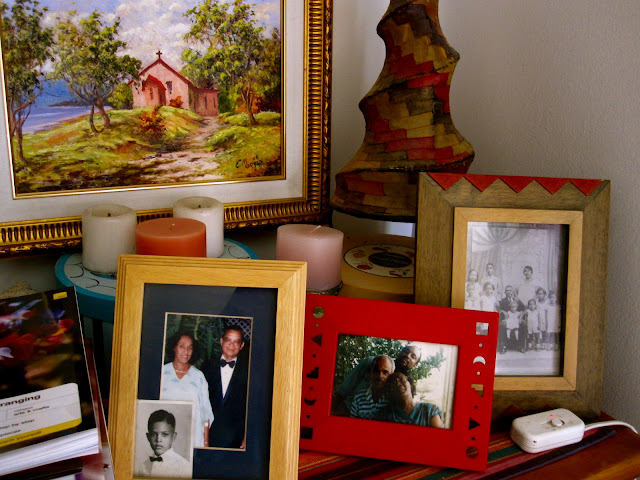 The photo above shows a corner of my house. The frame on the left is of my parents at my father's retirement banquet the very month my son was born. The photo inset is of my brother when he was five. That was his passport photo for our trip to England, where we attended school for a year. The red frame in the middle is a photo of my husband with his parents. It was taken on the front gallery of his family's home in Antigua soon after we were married. The photo on the far right is of my mother's family of origin, my grandparents and their nine offspring, including my mom and Winnie and the rest of them. I wish I could have a big bawdy party with all these people and their families for the hollerdaze (thank you Susan T. Landry, for that perfect word) but since I can't, it helps immeasurably to know that my mom is at least reclining with a view of the hills in all their sun splashed watercolor glory.