We're deep in the planning of Aunt Winnie's memorial service and the details are endless. Hardest for me is cleaning up and clearing out Aunt Winnie's apartment so that family members who are coming for her service on April 5 will be able to stay there. Her home had literally become a hospital wing; that bed she used, the one that pumped air under her body continuously to keep her papery skin from breaking down, was a huge and complex piece of electrical machinery. I didn't grasp quite how complex it was until I watched the men dismantling it and packing it up today.

Her room is empty now, the carpet stained and old, the walls bleak and tired, the furniture scuffed from decades of use. The house looks sad, and Aunt Grace, who will be staying there with her two daughters and three of my other cousins, was on the phone last night, crying, saying she didn't think she could walk into that apartment again knowing that her sister was gone from there forever. So much hard life occurred in that place, as Winifred slipped from us by inches, skin and bone at the end, her body curled tight, her cheekbones sharp, her eyes sunk deep, hair thin and white and feathery. I see her there, even as I collect and compile photographs from her earlier years, and try to bring back the way she used to be, her eyes alight with some mischief, a woman onto herself, striding ahead of the pack, the rest of us following like eager ducklings in her wake.

Going through her things this afternoon, I found a folder that held a literary magazine I had contributed a short story to in college, and issues of the college newspaper that contained stories I had written, the newsprint yellow and brittle with age. My own mother had not kept these things. I had forgotten I'd even written these stories. But there they were, faithfully preserved by Aunt Winnie, who pretended not to be sentimental, but kept my student writings in a red folder tucked among a pile of photo albums next to her chair.

Here's a picture I found. It was taken at my daughter's baptism. She is the baby and four of the sisters are clucking over her, each of them knowing what's best and no doubt arguing happily about it. That's Aunt Grace, Aunt Maisy, Aunt Winnie and my mom, Gloria. I love the way they are all holding my child. My daughter would grow familiar with the tornado of woman energy that whipped up whenever the sisters were together, but by the look on her face in this photo, she wasn't quite used to it yet.

My girl will be 20 years old in two days. Next week, we are going to St. Lucia for her spring break as planned, and will return for Aunt Winnie's service at the end of the week. By the time we get back, family members will have arrived from everywhere. I'm a little stressed right now, but I know we will manage to send Aunt Winnie off in grand style. She deserves no less. 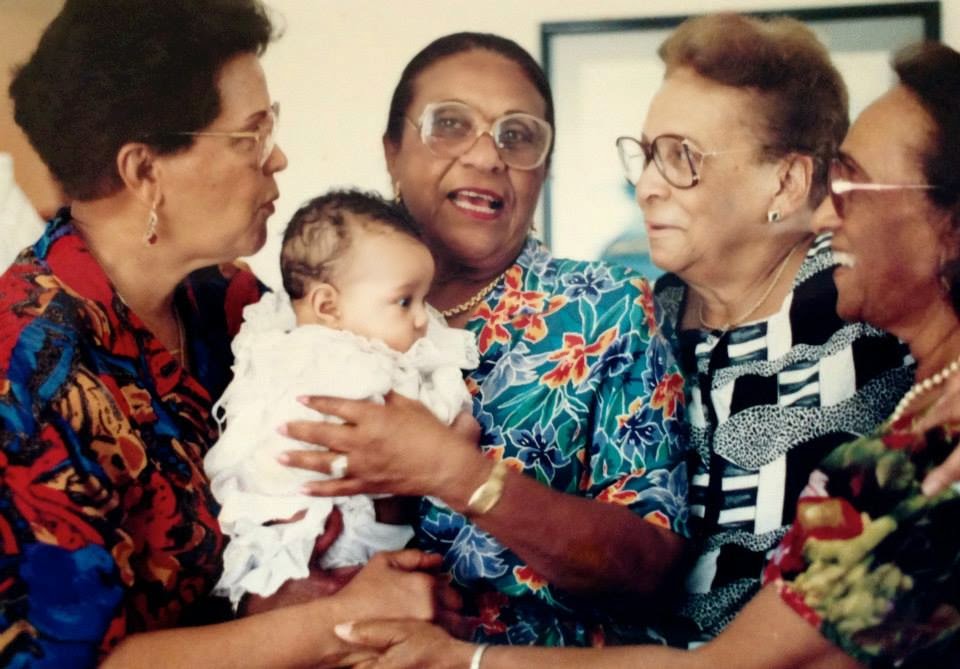