It's pouring rain out there and inside my house is dark with comforting pools of yellow light. It's the kind of rain that makes you glad you don't have to go anywhere or do anything but stand at the window and admire its commitment.

My daughter texted me after her shift was done last night. She said, "Work was quite long but Im feeling pretty fulfilled from it, Im enjoying myself."

My guitar-playing nephew in Virginia has his prom tonight, and my cousin (his mother) was just on the phone telling me about how expensive limousines are, and so what they've decided to do is to rent a black luxury car for $65 for the day, and have her brother dress in a black suit and be his nephew's chauffeur for the night. They won't tell anyone that the limo driver is actually his uncle, a soldier of some rank (I can never remember the actual rank) who has done two tours of Afghanistan and one of Djibouti, who is contributing his services as a graduation present. The one wrinkle is my cousin, the soldier, is a talker. He loves nothing more than a good difference of opinion. In fact, his sister long ago learned to just agree with whatever position he takes, because it frustrates him no end, and he will actually jump to the opposite argument just to get a debate going. I find him endlessly entertaining, but my nephew is worried. He keeps asking his mom, "Now you're sure he understands he's not to talk at all, right? He's not going to start asking my prom date about her opinion on the insurgency in Iraq is he?" Knowing his uncle, it's a legitimate concern. Even so, I think their plan is genius.

Speaking of cousins, the one who is an addict was at my door at 6 a.m. this morning asking for money. She has rung my doorbell at this ungodly hour three mornings this week. I made the mistake of giving her a twenty last weekend and now she thinks I am a mark. I did not answer the door. I can never get over how hard addicts work for the next high, and I can't help but wonder how everything would be different if they could put that energy and intensity into a pursuit that wasn't slowly destroying them. But it's an idle reflection because we all work hardest at what inspires us, and I suppose the high is still what is inspiring her.

The rain is easing now. I have work to do. Lucky me, it's the kind that inspires me.

I'm so taken with the colors here, the blue of the morning split by the orange-gold of the sun. 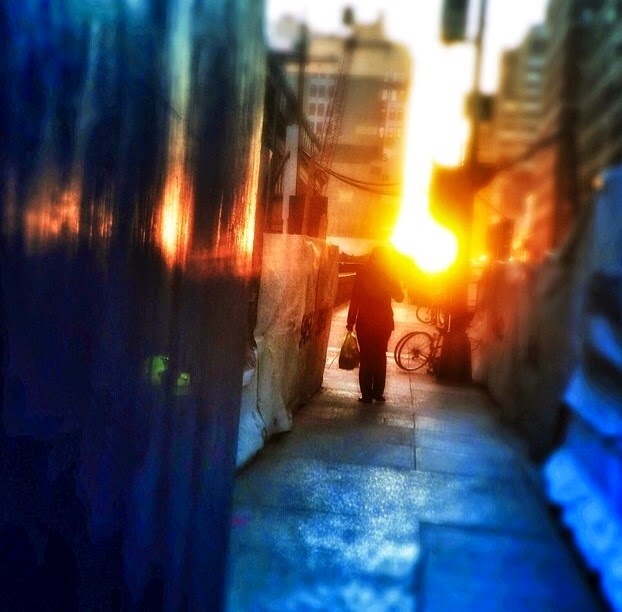