I've been doing my best not to give too much energy to what's happening in the GOP race, but this requires some focus y'all, because some truly scary shit is going down. 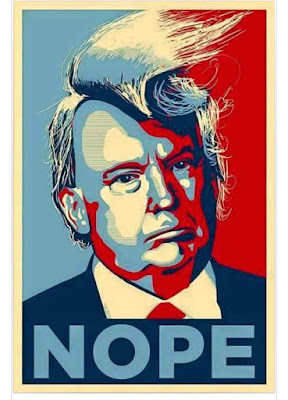 Yesterday I talked about GOP frontrunner Donald Trump refusing to disavow the Ku Klux Klan, after former Grand Wizard David Duke endorsed him. When asked if he would disavow this endorsement, Trump said he didn't know enough about "Duke and his group" to say whether he would reject it. What, really, does Trump need to study up on about the Klan? Is this man proposing to be president really so ignorant of the nation's history? Yesterday, I tried to dismiss this idiocy as just more proof that Trump doesn't actually want to be president. He seems to be trying desperately to torpedo his chances. Sadly, people will keep voting for him.

That was my position yesterday, anyway. I subsequently deleted all mention of Trump from yesterday's post, because I didn't want to sully the memory of my lovely girls weekend with his name. But today, I'm on that horse again, because yesterday at a rally at Valdosta State University, Trump asked his security detail to removed 30 to 40 black students in attendance, even though those students were merely standing silently in the bleachers.

From the HuffPo story this morning:

"I think we got kicked out because we're a group of black people," a tearful student said in a video posted by USA Today. "I guess ... they're afraid we're going to say something or do something. But we just really wanted to watch the rally ...."

Another student said the group decided to stand quietly in the bleachers wearing black attire as a statement. The group had no intention to disrupt the candidate, the student said.


The incident happened the same day Black Lives Matter protestors interrupted a Trump speech during a campaign stop in Virginia. At that rally, a Time magazine photographer was thrown to the ground in a chokehold by a Secret Service agent after stepping outside of the press pool.

Is this violent, racist, mysogynistic, xenophobic candidate proposing to be president of only the white people in America? Is it really okay for a presidential candidate to trample on any group's right to gather in a public place, or to deny them their first amendment right to protest peacefully? Not to mention, these students were on their own campus!

Valdosta police chief Brian Childress insisted the incident wasn't about race. "What I resent is now some of these folks are going around saying it was a black issue," he said. "That’s total nonsense.”

After rereading what I just wrote, I feel sick.

I keep posting about Trump because I think it's important to keep a record of what is happening, how this ugliness gathers momentum. I read an op ed piece yesterday by a Nazi concentration camp survivor who warned that the way Trump is speaking and behaving reminds him chillingly of the way Hitler behaved as he came to power. All I can say is I pray the forces of reason and tolerance in this country prevail in November and are able to put a Democrat back in the White House. I don't really care which one. I wonder if I will ever again feel as galvanized as I did by the candidacy of Barack Obama? Such a decent human being. I can say at least that there was one truly inspirational president in my time.