Well, so much for staying silent. Who was I kidding? I feel duty bound to share to what is going on around me, on my very campus. I attended both college and grad school here. On the steps of the main library, I shared my first kiss with the man I would later marry in the campus chapel. I raised my children here, cared for my aging mother here and buried my much loved aunt here. I have now lived in various apartments around this neighborhood for going on forty years.

Our current apartment is within the radius of Columbia University. There are campus buildings all around us, and students coming and going on the street outside my house at all hours of the day and night. I know this school, both from the inside—as an undergrad at Barnard and then as a grad student at the Journalism School—and from the outside—as a neighbor whose children played on College Walk when they were young, and whose daughter, now that she is grown, often walks to the campus and sits on the steps by the fountain, reading or just thinking.

This has always been a very progressive and racially diverse neighborhood. I never thought twice about being a woman of color as I moved around it, and indeed as I moved around all of New York City. I have taken for granted that I live in a socially conscious community. Columbia students took part in Civil Rights and Vietnam marches in the sixties, apartheid rallies in the seventies, and Black Lives Matter protests now. It's why the whole time I was growing up in Jamaica, I was angling myself toward this city, and this school. I wanted to be where movements of change were actually happening. I wanted to be a journalist.

And now this, reported on the Columbia University student news website Bwog:

Bwog recently received screenshots of a Class of 2017 Wrestling Team GroupMe. The... men in the group message mock women’s appearances, make jokes about rape, use homophobic and racist slurs, and engage in other distasteful interactions...

The messages show a lack of respect for women—even those with whom they interact regularly. In the screenshots we received, the wrestlers sent each other numerous photos of female Columbia students and mocked their appearances. One of the men said a female student looked like “a dude in a wig.” Another woman was referred to as “fish pussy.” The wrestlers in the GroupMe also mocked female students as a whole. In one message, a wrestler refers to female Columbia students as “ugly socially awkward cunts” who feel “entitled.” Just messages before, another member of the team expressed frustration over how their team would “run the town of any state school” where “every girl begs for the cock so hard.” It appears these team members don’t realize the irony in referring to women as “entitled” for wanting to control their own bodies.

Among the misogynistic messages is a shocking proliferation of racism and racist comments. Their comments about black women come across as especially distasteful and cruel. The wrestlers’ usage of the n-word is flippant, too, and they use it to refer to women with whom they’ve hooked up, workers at businesses around Columbia, and protesters in Ferguson, MO.

Here are some of their messages: 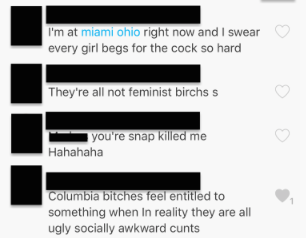 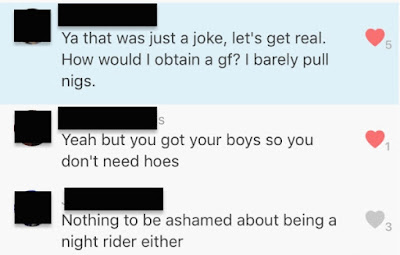 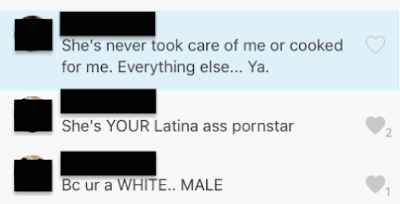 Columbia has suspended the wrestling team's season pending an investigation. Of course, the students'  names have been redacted from all reports to protect their futures as Masters of the Universe who might one day run for president of the United States of America—and win.