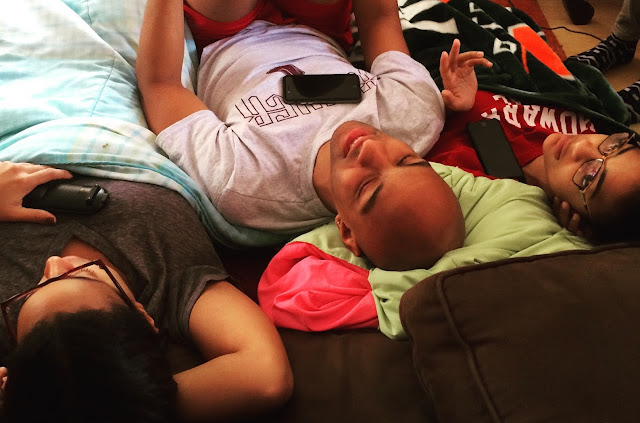 All week, family members were arriving—from Trinidad, Orlando, and Washington DC. By Wednesday evening, the house was festive, with cousins sprawled everywhere, voices rising, laughter ringing, as everyone caught up with one another amid preparations for the next day's feast. 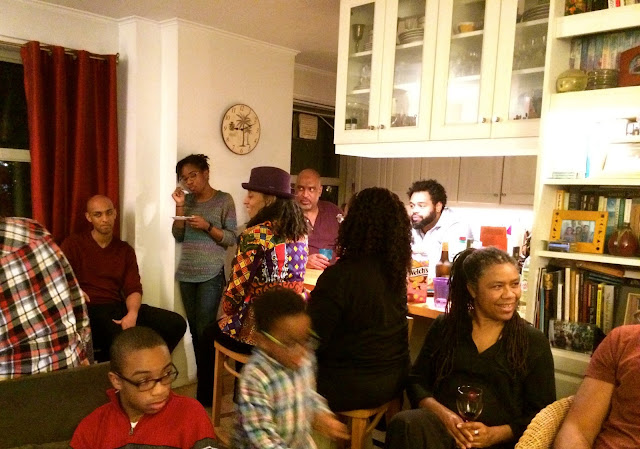 On Thanksgiving, we crowded into our three-bedroom apartment, thirty-three of us in all. My husband borrowed chairs from the church. "Where will you put them?" I asked, wondering why he bothered. But he had the foresight. He wheeled the two bikes from the hallway into our bedroom, and lined up black metal chairs along the bookshelves, creating a cozy annex to the main gathering area. We were a convivial row with dinner plates balanced on our laps and stockinged feet up on the wall. In the living room, people picked their way over one another's legs, finding seats where they could, the little ones cross-legged on the floor around the coffee table. The old ones had the best seats, Aunt Beulah and Uncle Quintin, 87 and 89, on the long couch, Aunt Megan, 93, in the armchair at the center of the action. We brought  their plates of food to them, and gave them real china and silverware, on trays. Everyone else made do with disposable plates and plastic cutlery, and no one complained. 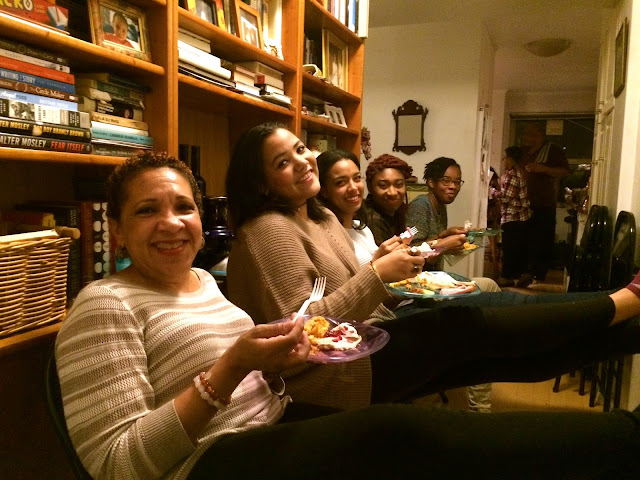 The food, mostly prepared by my husband, was delicious as always. This year, there were no leftovers to feast on the next day. Almost every dish was picked clean at the end of the evening, such was the crowd. It was too much, really. At one point, a quartet of our guests began debating politics and black lives matter versus LGBTQ rights in increasingly strident tones. I was elsewhere at the time, in the back bedroom with another group. One by one everyone from the living room found their way to us. "Too loud out there," someone said. "I can't deal," someone else said. And then the little kids came in. "That's a grown up conversation out there," the 9-year-old announced. "Too grown up for us," the 6-year-old added. And so they began to play in out midst, their older cousins indulging them happily, my niece reminding them occasionally, "Inside voices please." 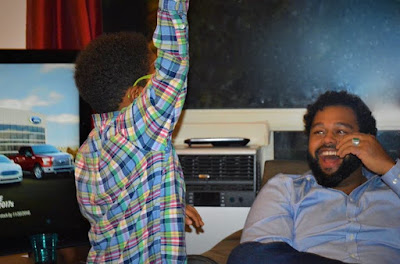 By then, it was almost 10 p.m. and the crowd hadn't thinned one bit. Instead refugees from the living room discussion crowded into the back bedroom, leaving only the debaters out front. "Let's take back the kitchen with a margarita after party!" one of my cousins said, and everyone marched out to start making margaritas with the top shelf tequila my niece had brought. We'd been waiting for the younger kids to be taken home before we started the margarita round, but now it had become more important to bring back the convivial mood. I walked into the living room to hear one of my relatives preaching to my Muslim guests about Jesus and the devil at a feverish decibel. I had no idea of the point she was making, because her tone was such that you want to close your ears, not open them. I reached out and squeezed her arm. She looked up at me mid-sentence. "Should I stop?" she said. "Yes," I nodded, ready at that moment to cause offense, but my relative did not seem offended. "Okay," she said cheerfully and everyone else changed the subject. 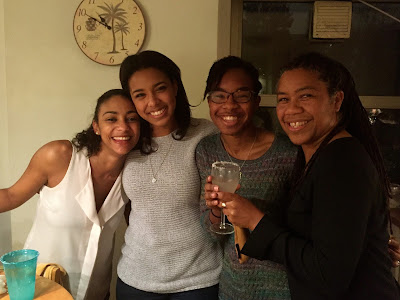 Once the margaritas were passed around, the mother of the three youngest boys said, "Oh, I see the after party is starting. Time to take my little ones home." The boys cried as they were putting on their coats. They had enjoyed being with their cousins and didn't want to leave. That made me happy. This was the first time their family had come to our Thanksgiving gathering, and it seemed they all enjoyed themselves, except for that interlude where politics and proselytizing interrupted the easy laughter. My husband had said earlier that he'd thought about banning any discussion of politics, but then he decided everyone would just sit awkwardly censoring themselves, rather than saying what they wanted and moving on. I think he was right; I just didn't anticipate this one relative getting so worked up. I heard later that my 87 year old aunt, who sat through the whole thing, kept muttering to her daughter, "Just agree to disagree." I think she just wanted the noise to stop. It was lovely again when it did, and the rest of the evening was the way it usually unfolds, with riotous laughter and storytelling, and everyone just enjoying the company of everyone else. 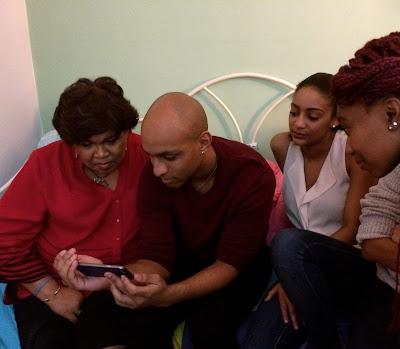 We still have houseguests here, three nieces and a college friend of my daughter's, and my two cousins who feel like sisters to me, all people with whom I am supremely comfortable. The teens and twenty-somethings went Black Friday shopping yesterday and today everyone is wrapped in blankets, refusing to set a foot outside the house. My husband and daughter and niece are in the kitchen making sun-dried tomato and spinach ravioli with cheese from scratch, which will be our dinner. The rest of us are about to continue binge watching Quantico, which we started the evening before Thanksgiving. We're on the verge of discovering whodunit, so I'll wrap up with a few more photos from our evening with family and friends. I hope you all had a wonderful Thanksgiving with loved ones, and that your weekend so far has been peaceful. Most of all, I wish you a serene corner away from the chaos, a moment in which you can truly rest. I love you, my dear friends here. I am so thankful for you. 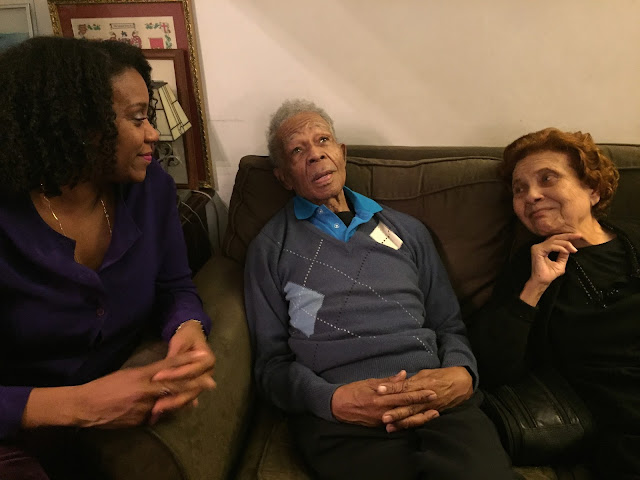 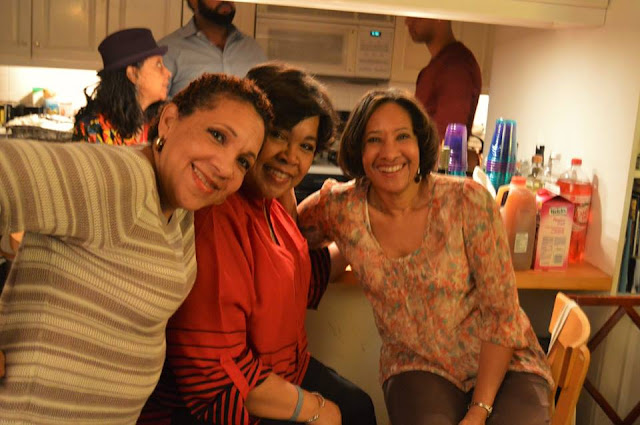 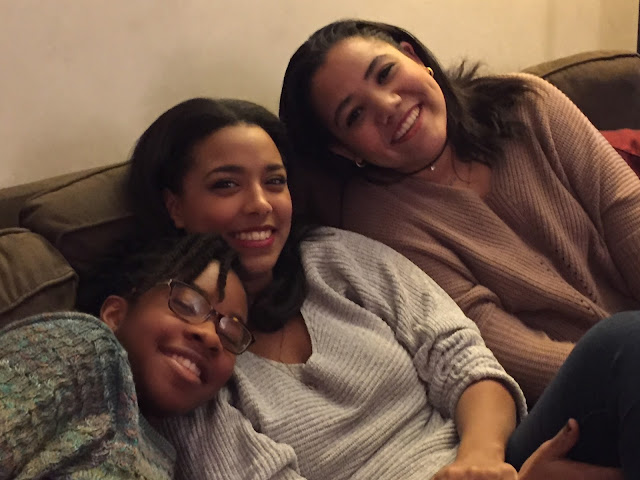 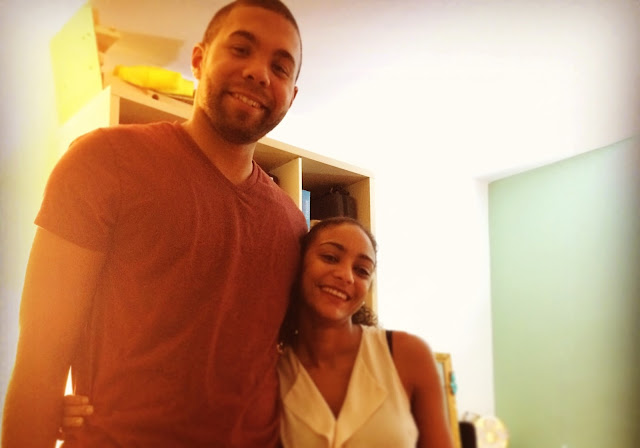 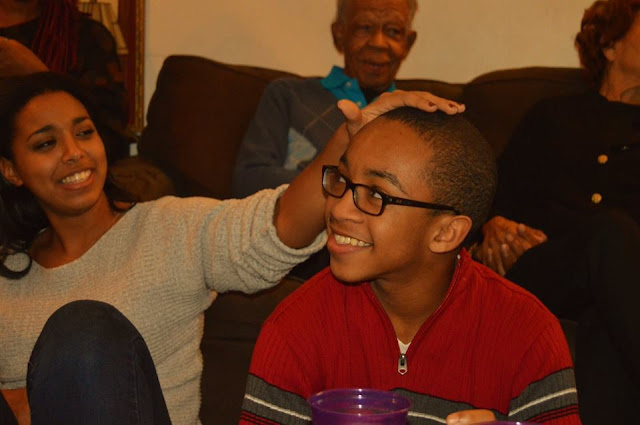