There's a lot going on, life happening. My husband is in a lot of pain with muscle spasms in his back, walking is excruciating for him, and our son slept over last night to help out. Our daughter just texted that she's coming over tonight to cook us dinner so we don't have to think about that, and my God how lucky and blessed we are with our children. I am humbled with gratitude for them. My son took his dad to the ER yesterday, and I think his EMT uniform got them moved through a little more quickly than would otherwise have happened. Just as I never worry about a situation being well handled if my husband is present, I realize that now I feel the same way about my children.

As for the current president's decree yesterday that transgendered people should no longer be allowed to serve in any capacity in the military, I hope someone sues his office and forces the courts to overturn him. Some say the tweeted decree was his effort to distract people from the health care shenanigans playing out in the Senate, another atrocity, but if that is so, it just shows the extent of his soullessness, that he could conceive of such inhumanity in the name of distraction. He is empty to the core, a yawning dark hole of malevolence. We will not be sucked into its maw. We will resist him and his enablers.

In the meantime, my daughter and her boyfriend are dog-sitting again this week, a chilled-out little guy named Beau. Last weekend they sat for a puppy named Ned, who they said was a cute little monster, who had to be walked incessantly. In the middle of the night, after cleaning up Ned's mess in her brand new apartment, my girl logged onto the dog sitting website and changed her profile to say no dogs under nine months, or who are not house trained. That's a picture of her holding Ned. I love when she dog sits because I meet her in the courtyard and stroll along with her as she walks the dog. Loveliest exercise ever. 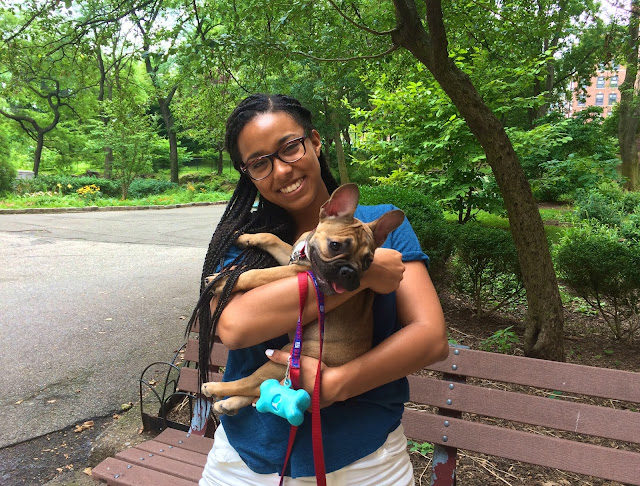 Please send a good thought for my husband, that his pain goes away, that he can walk firm once more. My son says I am trying to will him better on an unreasonable timeline for what he has. Only time and rest will fix things, he said. The meds aren't fixing anything; they don't even take the edge off the pain.