My kids are making me so proud. 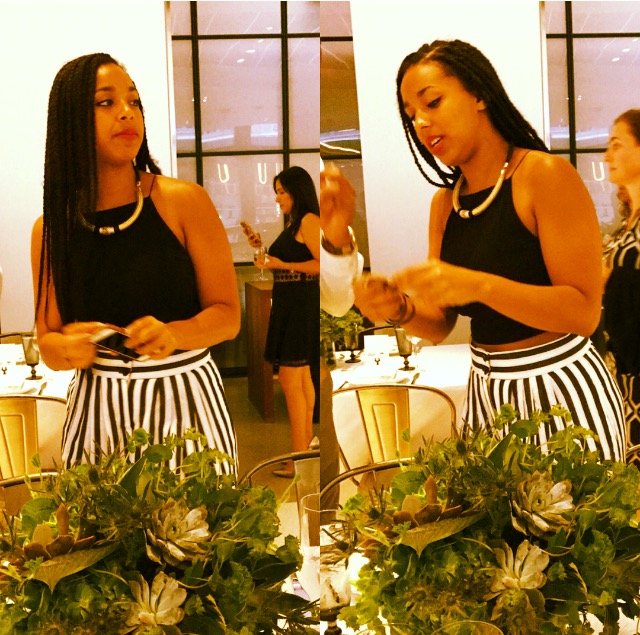 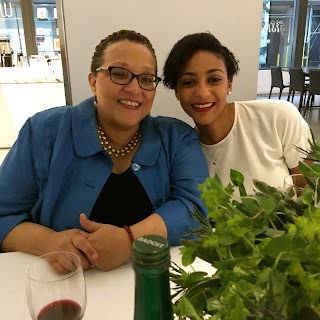 That's my daughter at a fundraising dinner series she helped to plan and stage, as part of her job. Three of the city's top chefs each cooked for sponsors and donors on successive nights, all for the cause of feeding New York's hungry. I attended the second evening of this event, as the tickets were more affordable than the usual $750 for the organization's galas, and the dining was family style.

My girl got to sit with us; usually she's up and around, working. My darling husband was supposed to come, but he had been feeling under the weather since Tuesday, so my niece was my date instead. It was us and my girl, and her boyfriend, rubbing shoulders with New York's deep-pocketed crowd, the ones who care about hunger. I sat next to a lovely woman who told me she grew up poor in Cuba, and knew what it was to be hungry. " I had no idea my circumstances would change so significantly," she said, putting an arm around her husband. "It's all thanks to him." She shared that he was from a Philadelphia Main Line family, and was a corporate attorney. "He is the best husband," she said, "and now we have houses and enough of everything, and since we'e going to spend money anyway, why not feed people who still don't have enough to eat."

This woman also told me that my daughter is absolutely beautiful, and she is, and last night she was positively radiant in her semi-formal attire, greeting and mingling with the evening's guests. It's her smile that makes her shine, though. It's hard to miss. My niece and I patted our hearts and said, "Look at our little one, in her element, and affording us such experiences." 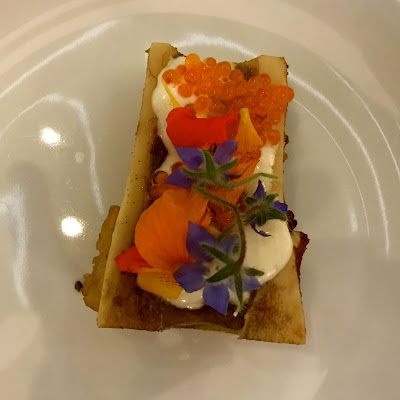 The five-course meal was cooked by Angie Mar of the Beatrice Inn. The lavender  and anchovy prime rib was way too rare for me and my niece, but my girl took a whole portion, saying simply, "This is the chef's vision. I trust the chef." The warm plum and blistered tomato tart looked beautiful and was divine— I was so busy enjoying it I forgot to take a picture—while the roasted bone marrow with lemon cream fraiche and caviar was perhaps too sophisticated for my humble palate. The edible flowers made it look appealing though, and I took a brave taste. For dessert, the bone marrow creme brûlée tasted a bit like warm smoky brie. I ate most of it, trying to decide what I thought.

The best part of the evening was being with three fine and funny young people whom I love, and also meeting the people my girl works with, and having them, to a one, tell me how much they adore my daughter. One woman said quite seriously, "I didn't realize at first how fresh out of college she was. She has such a solid and humane core, and a very reasoned judgment." Even her bosses came over to rave about my girl, and the woman next to me leaned over and whispered, "She's the most popular person in the room."

In the cab on the way home, I told my daughter about all her good reviews. She said, "Mom, they kind of have to say that to the mother." But I, the mother, believe they were speaking true. 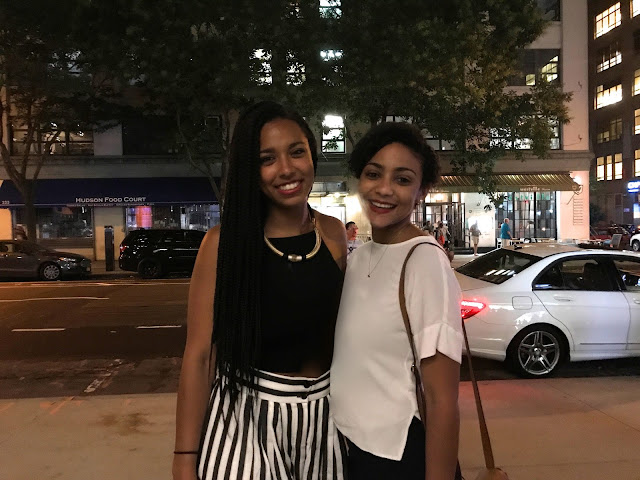 Before we parted, my girl gave me a sprig of lavender and told me to make sure to give it to her daddy. "He will know what it means," she said. "It's our thing." Indeed, when I dutifully handed it to him in his sick bed, he smiled very broadly, and sighed contentedly. I am happy to report he is on the mend and went to work this morning. 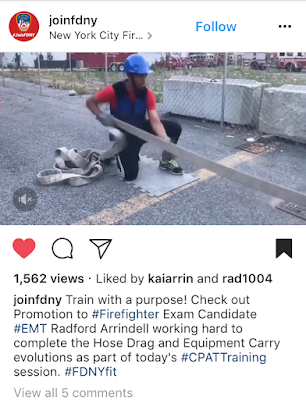 My son meanwhile is doing his firefighter promotion training at the Fire Academy this week, and what should we see posted on their Insta site last night but a video of our boy doing the Hose Drag, over a caption that said, "Train with a purpose!" I don't know how to post the video itself, but here is a blurry still from it. They are so different, these two children of mine, one in a world of glitzy schmoozing last night, the other gritty and sweaty in training. But they are both, in their own ways, working to secure people who need some help. They fill my heart.
Posted by 37paddington at 2:59 PM