On this weekend a year ago I was sitting in a hospital room in the intensive care unit watching little numbers on monitors whose wires were attached to my husband. He'd had his chest cracked open for heart surgery on the Friday before Labor Day weekend, and he was just starting on the long road back to health. And he made it. He's doing well these days, better than before.

He made smoked brisket this weekend, a three-day affair, and this afternoon our girl and her guy are coming by to partake of it. They're the cutest. Yesterday my daughter's boyfriend made spare ribs in the stove-top smoker we gave him for his birthday a year ago, and they popped over at close to ten last night to bring us a sample. Hands down, they were the best ribs I ever tasted. The man and I were seriously impressed. Today, my husband returns the favor with his brisket, which my daughter's boyfriend declares is the best brisket he's ever tasted.

Other than these culinary forays, it's been a low-key weekend. I've been writing every spare moment, as I set myself a goal of 35K words by the end of today. I'm closing in on 34K at the moment, and that might be as good as it gets for today. In the book I wrote last year, which was on the same schedule, I was about ten thousand words further along at this time, even with the break I took when my husband got sick and had to have a leaky heart valve replaced. I'm trying to get in as much work time as possible, as my daughter and I are heading out of town soon for some down time on our favorite lazy river. It's to celebrate her promotion, and just for a quick mama-daughter getaway. I can't wait. 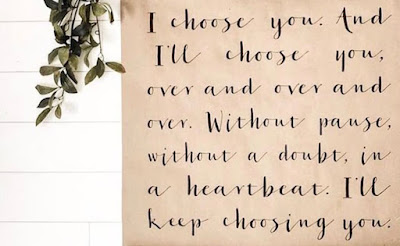 I've been seeing this sentiment around on social media, and I like it. I told my husband I'll keep choosing him every day.