I had an experience

I went to DC, I met my potential book subject, she was amazing and vulnerable and funny and wonderful. Her agent, for all his beauty, had a warm demeanor and kind eyes. I did my best. Once in the room with them, I managed to mostly forget about my awkward self and focus on her, diving into my curiosity about her life, my admiration for her courage and outspokenness in these times. I left there with my heart beating fast, all fluttery and excited because I felt as if I might really have a shot. But last night on the bus home to New York in driving rain, with each mile covered, I started once more to wonder why on earth she wouldn't choose someone local. As I told a dear friend this morning, I am at peace with whatever happens. I met a fantastic warrior woman. I had an experience. For now, it is enough. And if it turns into more, I'm ready. 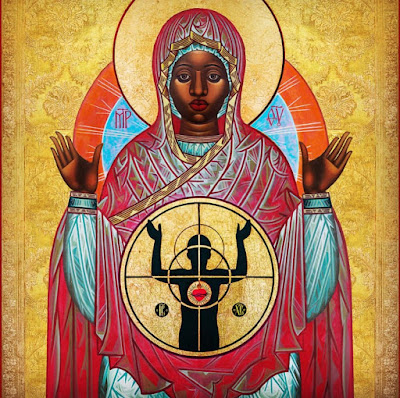 Meanwhile, this morning in the city, it is snowing. My sweet man is in the kitchen making seafood gumbo for a Mardi Gras fundraiser at our church this evening. We won't be there this year. We have previous engagements that will soon require us to get out into the snow. The man and I are going to a play with a friend this afternoon. She invited us and another couple, because she thinks we need to meet each other and become friends. Our host grew up with the wife of the other couple. The husband is a Jamaican-born minister and author who commissions the most incredible and confrontational religious iconography, like this extraordinary piece titled "Our Lady of Ferguson and all those who have died from gun violence." It was on loan to our church for the past year. I have never seen a photograph of this altar-sized icon that does justice to the experience of viewing it in real life. The gold foil shimmers and it is simply stunning. The minister's aim is to commission religious iconography from every culture and religion on earth. From a Korean artist he had an icon written (I've learned that religious icons are "written," not drawn or painted) that reinterpreted the famous Botticelli painting "The Birth of Venus." In that icon, Venus is depicted as Asian in traditional Korean garb, but instead of a shell beneath her feet, she is standing on a lotus flower that rests atop the mushroom cloud of an atomic blast. Whoa.

Also on our dance card, tonight we will attend the engagement party for one of our son's friends from middle school. It is being held by his parents. Our son and his girlfriend are going too. My husband and I have been in closer touch with this young man's parents than our boys have been in recent years, in part because the groom-to-be now lives in Ann Arbor, Michigan, where he is studying law. This kid was my son's first friend when our boy moved to a new school in the third grade. He was so nervous the night before. "What if they don't like me?" he asked, his eyes pooling. The next morning he went into the classroom and was seated beside this boy, who immediately started talking to him about Harry Potter. I was watching from the doorway as my son, eyes suddenly dancing, engaged the conversation with matching animation. I exhaled, knowing he would be okay. Ever since, this kid has had a special place in my heart for the way he welcomed my son in.

Happy Saturday, my friends. See you on the other side of this chock-full day.