A good and preposterous New Year 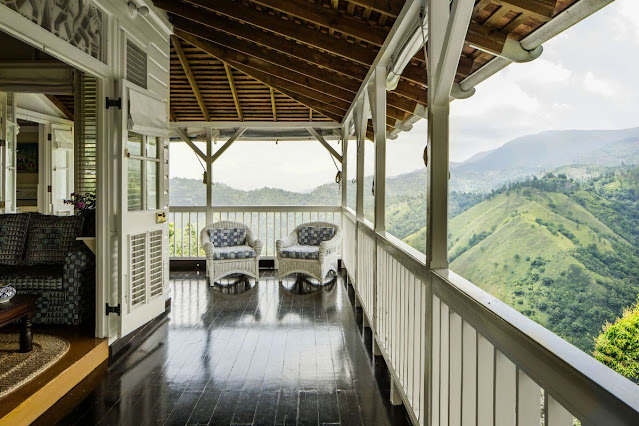 A year ago, I was wandering along that verandah, after having brunch with extended family at Strawberry Hill overlooking the Blue Mountains, at the end of a joyful week-long gathering to celebrate my niece's wedding in Jamaica. We all brought in the New Year in a penthouse suite overlooking the lights of Kingston harbor, and I remember reveling in the grace of being surrounded by all the people in this world I love best. None of us could have imagined the separation and loss the dawning year would bring. I think we would have laughed a little longer and held each other a little tighter.

At midnight this New Year’s Eve, the man and I toasted good riddance to 2020 with our niece who lives with us, sang Auld Lang Syne, then cleaned up the kitchen and went to bed. On New Years Day, I mostly worked, then climbed under the covers and finished reading Hidden Valley Road by Robert Kolker, a fascinating but sad account of mental illness in one family. I am now reading Notes on a Silencing by Lacy Crawford, her memoir of being sexually violated by older boys as a fifth former at the prestigious St. Paul's boarding school in New Hampshire. I'm so taken with her voice in this book. She rejects the notion of being a victim and is claiming her full power in this telling. The way she does this bears studying. As far as I've reached, the narrative is so well done, a rallying cry to and for women.

I'm so happy and relieved to be able to read whole books again. The concentration to do that went missing for a good long while. Possibly, the ground for its return was tilled by the absorbing novel I just finished editing, in which I completely lost myself. I'm noticing now that outside my window, it has started snowing, while in the reaches of my house, my niece is playing "Colors of the Wind" on her cello. To this lovely sound, I'm slowly clearing the decks of overwork.

I have this morning sent my subject's final changes on first pass pages back to the publisher. Their offices were closed last week, but they wanted to have the pages back in time to work on them first thing Monday morning, hence the Sunday deadline. The entering of insertions, deletions, and comments on the PDF was a fairly intricate process, not a tracking system I've used before, and it took some downloading of software and close study of the publisher's instructions to get it right. In the email to which I attached to first pass pages just now, I signed off by wishing everyone a "good and prosperous New Year." When I proofread the email, thankfully before sending, I saw that what I had actually done was wish everyone "a good and preposterous New Year." What the hell, autocorrect? But appropriate to the times, no?

I mean, the imposter in the Oval Office until January 20, is more unhinged than ever as he mounts his last ditch efforts to overturn the election. This after his legal team's fifty-nine challenges claiming ballot tampering and voter fraud (but only in states where he lost) have already been ruled without merit by the nation's courts. We should be grateful that at least one branch of government stood firm against authoritarianism. The latest seditious effort by Republicans to reject Congress's certification of the Biden-Harris win on January 6 won't work either, and it's a pathetic spectacle. You know how they say walk a mile in my shoes? Well, I can say with absolute certainty that in their shoes,  I would rather give up the power of political office than pander to the cult of Trump.

See how I'm trying to not devolve here into the profanity any contemplation of our current political reality always provokes in me? My elegant and dignified mother used to say, "The moment you resort to swearing, dear heart, you've lost the point." I don't actually agree this is always the case, but sometimes, I go with it just to imagine her smiling down at me, serenely nodding her approval.